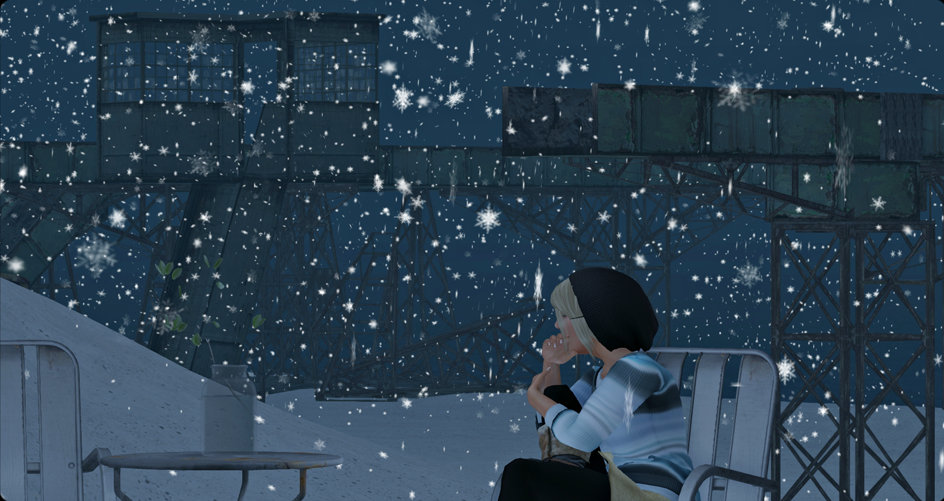 And so Furillen returns to Second Life. Built by Serene Footman it is one of the classic spaces, in its orginality, the detail that was added over time and its sparse aesthetics. But it also became a social space – a place that people visited because of the feel of the place, something that is difficult to define.

Serene has now got a retrospective at DixMix Gallery that is worth visiting. Somehow I doubt that he will see it as defining the end of things, as retrospectives can be. Creativity flows, sometimes more sometimes less, but it’s always going somewhere. It’s just not always where it’s expected to go.

And indeed that’s where I will step into this. Call it video art or machinima, The Constant Falling spoke back to me once I made it. That doesn’t happen often. We often make things with an intention, and its more or less met. But speaking back is when the work is more effective and carries more meaning than imagined. It opens out new possibilities, and suggests a new creative direction.

It was the combination of visuals and music, the emphasis on pace and aesthetics, and the absence of narrative. It is not just machinima, as a recording of gameplay. And it is more related to art than film.

Made three years ago, it was followed a few months later by The Music of the Spheres, which was the first work selected by a film festival – Supernova in Denver. Shortly after that, I started the doctorate, practice based in Contemporary Art at Lancaster University, based on my video making. It’s a sequence of events that has been life changing.

Doing this post and looking at my previous work has made me realise how many much of my video art has been located in Serene’s sims. So I’ll just list them with links!

The Constant Falling: As talked about above. Blog post.

The Colouring of Snow: Performance by SaveMe Oh. Blog post.

Solitude: First time I had used a literary work in a video made in the virtual world. Related to the poetic avant garde film or film poem – blog post.

Street Spirit: A video made of an art installation I built to reflect the subject material of a music event to be held at Furillen.

Escape to Blue Jazz: Rare (for me) use of narrative, also including a mixture of archive film and my own actual world sound recording. Blog post.

Floyrillen: Contained a lot of work built by myself in Second Life, again reflecting the subject of a music event to be held in Furillen. Blog post.

Chesapeake Bay: Made after an injury that had kept me out of Second Life for some time. Another piece that uses pace to achieve a sense of feel.