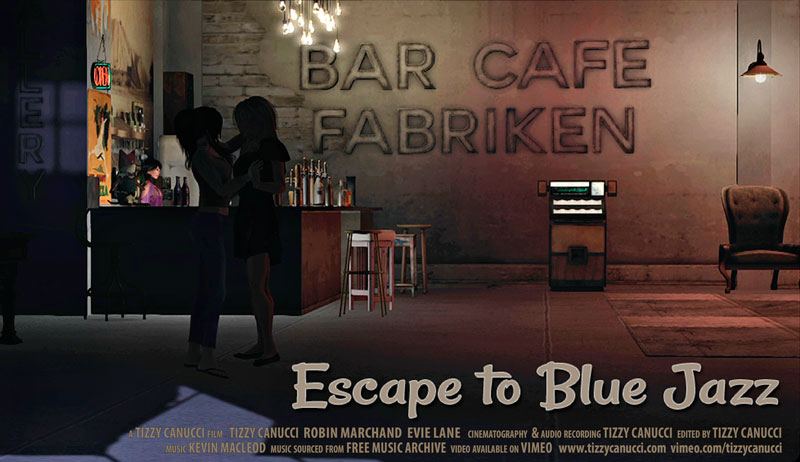 Creativity goes through phases and at the moment mine is very much around video and the blog is being a bit neglected. Video content is becoming increasingly in marketing, so there’s a bit of a connection with real life and it’s also partly a question of time.

And it’s also about the flow of ideas, and I still keeping getting ideas about things I want to try.

The lasest video, Escape to Blue Jazz, brings together real life sets produced in Second Life from my own real world photography, and combines it with an element of autobiography. Writing advice is often to write about what you know. This has been more the case in the last few videos, where music has been a part rather than driving the whole. However, music is essential to my life, so the right music choice is vital.

The photographs were taken in Kendal, Manchester and Bristol and processed in Photoshop before being incorporated into the sets. Audio was recorded by myself at various locations; the station location was partly chosen because I already had the audio. The bar was at Furillen in Second Life, a location that has now closed.

This was my main machinima for May, but I also produced a more documentary video of Rose Borchovski’s Running – see below.

Escape to Blue Jazz from Tizzy Canucci on Vimeo.

Running with Spanish Power is a record of the Susa Bubble installation by Rose Borchovski on LEA7 in Second Life, which was only there for one week during May 2016. It’s always good to see her work and this was the first real opportunity to catch a new installation since starting to do machinima. The sounds were sourced from Free Music Archive as usual.  The track was selected from a set of recordings of sound generated by High Voltage Power Lines and electrical substations located in the southeast of Spain (Fortuna, Murcia, and Valencia). Some are noise without much discernable variation. However, there were a couple with a  strange musical quality, and I selected one of them. The things you find when doing this kind of work!

Running with Spanish Power from Tizzy Canucci on Vimeo.

3 thoughts on “Running to Blue Jazz”