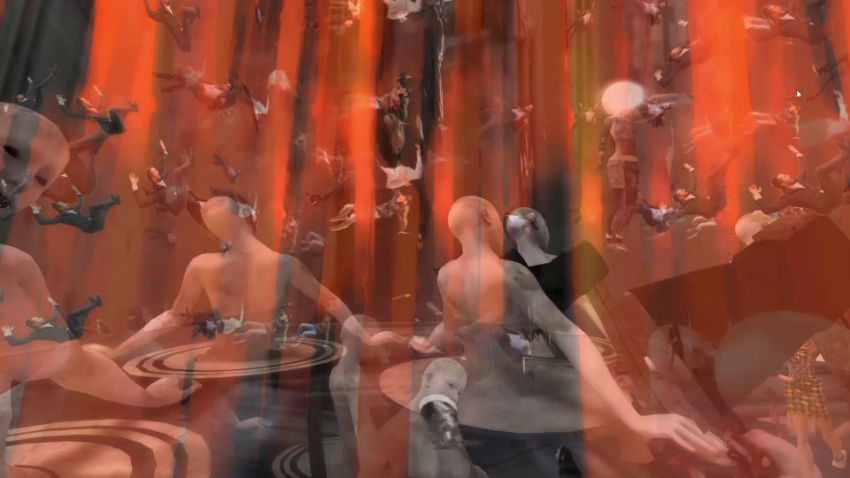 Supernova Digital Animation Festival announced this year their ‘kicker line’ (to use a poetry term) would be ‘World on Fire’. In my usual way, I initially thought of pushing back along the lines of I Don’t Want to Set the World On Fire, as Benjamin, Durham, Seiler and Marcus put it. The most well known version is the one done by The Ink Spots in 1941. Instead Flames Tear the Soul turned into something quite darker, taking a deeper interpretation of the idea, and looking across time. And whether the flames in the title causes tears from the eyes, or tears the person as a whole, I’ll leave for you to decide.

As this year is 250 years since Ludwig van Beethoven’s birth, it set off a chain of thought.

As Beethoven was gaining ground as a composer, he suffered increasingly from deafness. No treatment would hold it back. He reached a personal crisis point in 1802, when he wrote the Heiligenstädter Testament. I knew the background to why he wrote it, but I had never read it so never thought about its full context. This is an impassioned statement by a man, whose reason to live is creativity, who is trying to come to terms with the consequences and of losing that meaning. He never intended the Testament to be read by others in his lifetime, and as such was highly personal.

Of course, it was originally written in German and I had to find translations. Most are the same, but one of the few variations in wording involves a switch from ‘withdraw’ to ‘isolate’. That small difference would not normally have been that significant, but ‘isolate’ has striking resonance with the current experience of Covid-19.

I was compelled early to isolate myself, to live in loneliness. If at times I tried to forget all this, oh how harshly I was I flung back by the doubly sad experience of my bad hearing. Yet it was impossible for me to say to people, ‘Speak louder, shout, for I am deaf’.

Ludwig van Beethoven, 1802. Alternative translation: I was soon compelled to withdraw myself, to live life alone.

This is a paragraph near the beginning of the Testament, and Beethoven writes more about its deeper psychological impact. But after my own experience last year, this is what really floored me:

I would have ended my life – it was only my art that held me back. Ah, it seemed to me impossible to leave the world until I had brought forth all that I felt was within me. So I endured this wretched existence.

Just a year ago, I was in a bike incident where I came off and struck my head. I was with a group – no one knows why, and I don’t remember anything of it. In those microseconds of impact (literally) a die was cast (metaphorically): 1 or 2, death; 3 or 4, never the same. Fortunately I got the 5 or 6 for a complete recovery over time. But I was isolated at home for six months, my friendships collapsed, and no sense of whether I’d ever be able to resume my past life and work. And a shadow does still remain. However, the significant point is that two months after the injury, I woke and my reason to live had evaporated, just as Beethoven wrote about. In my case, I could think of only one thing – of finishing my doctorate in contemporary art.

We hold onto a set of hopes and dreams. Some are our practical plans. Some are dreams, if life were different. Some have been superseded – things we would have liked to have happened, but abandoned for alternative futures. Some are the labels we like to be seen to have. They are not reducible to logic.

So some are realistic, but others are kind of virtual possibilities. But in combination they form a sense of our identity and self – yet we barely notice them ordinarily, and take for granted this store of ideas in our brains. Until one day, for some reason, they shrivel and disappear. And we have to desperately cling on to something. Or give up.

This is all certainly personal, but the personal is a reflection of our wider life experiences as social beings.

Academically, the sociological is very much still a part of me, even if I am now sited in the arts. C Wright Mills’s The Sociological Imagination, published in the year I was born, has some key parts. In the final paragraph of the appendix he concludes:

Yes, personal troubles and public issues are different, but they are inherently connected and not separable. Covid-19’s effects will linger psychologically too, and we shouldn’t dismiss people’s personal challenges because ‘everyone’s been through it’, or because of their ‘category’ in society.

In my own case, last year after the injury I was effectively in lockdown, unable to leave the house for a while, and then after that only as far as I could walk. But I was fortunate, and pulled through and out of it. Only to be locked down again now in 2020. ‘So it goes’, as the Tralfamadorians say in Kurt Vonnegut’s Slaughterhouse 5.

So, I’ll drop the link the video here and carry on writing after. Watch the video to the end, as the ending matters.

Beethoven wrote his Symphony No. 3 in E Flat Major, ‘Eroica’, Op. 55 around the same time as he wrote the Heiligenstadter Testament. I deliberately wanted to make that connection in time in my video. The second movement seemed the most useful part to work with. That it is marked ‘Marcia funebre: adagio assai’ connected rather more than I anticipated.

Nothing ambitious then! There have been many good composers, but Beethoven’s use of rhythm cutting against melody, and of breaking down music to its almost impossible edges, is beyond compare, even today. And during what he thought of as unproductive periods, he was producing more work than the rest of us could ever aspire to.

To maintain the theme visually, I worked with three sets of things from Second Life.

The first was film I had collected, but never used due to the consequences of my injury, at performance events by SaveMe Oh. The first was in February 2019, after which I was unable to do video editing for months. The second was in February 2020, when I was trying to complete my delayed residency at Edinburgh Printmakers, and I was just about to move back to the north of England. The third was in an event recently, April 2020. As I’ve written before, I have problems with some of the iconography and symbolism of the virus, but these images, of being trapped, falling and twisting, I really liked. That SaveMe Oh strides in time to the marche funebre required no time editing. [I also added some more from another event in 2021 in an edit to remove other work.]

I’d also previously collected some visuals at a sim called Cornhub during August 2019, just before I lost contact with my computer for several months, which included images of the Statue of Liberty mostly disappeared under sand.

However, I still needed something to run through the whole video to connect it together. A fire dragon in a virtual world interpretation of hell seemed to have potential. So this is my avatar with a different body. I’m using a dance I’d picked up some time ago – the pace of movement uncannily matched the music. But importantly, it crosses boundaries, from human movement, to mythical creature, and an almost skeletal form. This section was filmed at the Eternal Conflict sim, which is a role-playing area from heaven to hell.

Some creative work is what you expect, and it is still good aesthetically. But other creative work – you step back from and it carries more meaning than you intended, and speaks back to you. Flames Tear the Soul is one of these.

So I will end this post with one of Beethoven’s lines, with which I finish the video:

Farewell and love each other.

Because in the end, that’s what we share, and where it all ends.

1 thought on “Flames Tear the Soul”