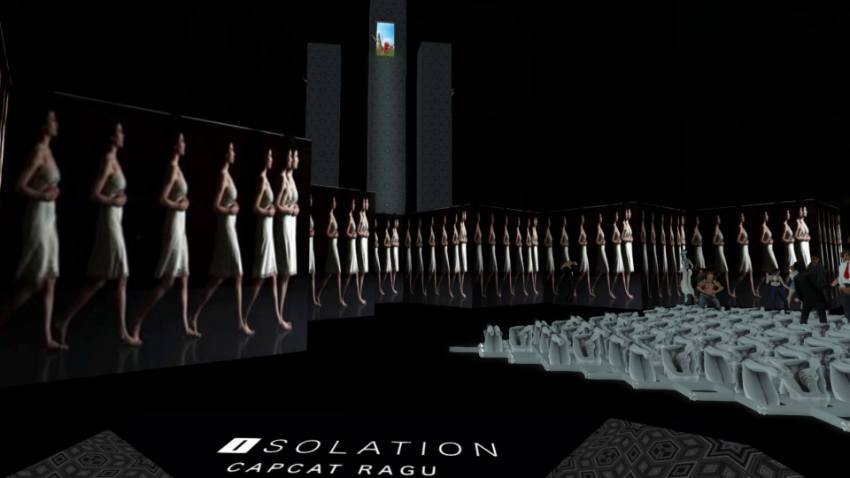 At 37Gb of data, two pieces of music, 60 pieces of video equating to 120 edits in 10 minutes and 13 seconds, statistically out of isolation came forth light was one of the most intense works I’ve made. But artistic expression is more than numbers.

I’ve written previously about my thoughts on Isolation by CapCat Ragu and how much I liked it, so I was keen to go to this event. I had produced a piece of video art in 2018 at another of her works, Delicatessen, and Innominate was selected for Supernova in Denver that year. Also, the DJ was Paloma de Coco, who I’ve met up with many times at The Glue House, a music venue in Second Life. I hadn’t expected SaveMe Oh there, but then perhaps no one ever does until she turns up. The location was at Ribong Gallery Artspace 1789, which currently has some other exhibitions by some Second Life artists I really admire.

Sometimes everything just connect so well, and it’s not entirely obvious why that should have been so. SaveMe’s performances are very much responsive, performance events rather than being planned beforehand. I like the spontaneous, as it carries the possibility of something unexpectedly good. This is the result of inventiveness, and serendipity as a bringing together of accident and sagacity. Predictable techniques and approaches can always do the good, but never achieve those levels. Perhaps as she says in the comments on Vimeo ‘We really touch the soul of saudade’. Touching souls is not done through routine, but through a feel, a sense of being in the world.

I have always thought that video going beyond about 7 minutes demands some conscious thought about restructuring it. However, this one didn’t seem to need that rebuilding into phases. The ten minutes, despite a lot of time editing and perfecting the clips, just seemed to happen – to flow.

So much depends on finding suitable music, as streamed music carries copyright restrictions. I knew Paloma was Portuguese, and her music selection reflected that, and so is CapCat, so that’s where my search started. I have never come across M-PeX before. It was one of those dream moments in Creative Commons work when you find something very good and well suited. The musician’s profile on Free Music Archive says:

‘M-PeX is a musician, composer and producer, the Portuguese guitar defines his musical identity, and creates an unique sound that mixes this instrument to the widely distinct sounds of dub, dubstep, trip-hop and drum’n’bass. His creations aim at modernizing and globalizing this traditional instrument born from Portuguese culture, culminating in a bold and innovative musical melting-pot’. Also known as Marco Pinheiro Mirand, in these two works he’s playing with André Coelho on contrabass.

Its tone and rhythms were a joy to work with, and as always, I was editing the visuals tight to sound.

For me 2019 was something of a lost year, with little space, time or ability for video art (machinima). It is good to be back with it. And with something that connects so well with the work of others.