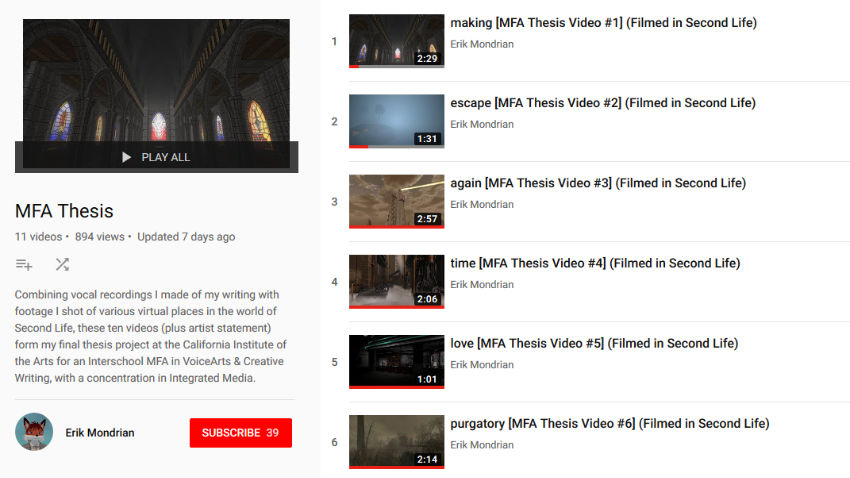 Over the past few years I’ve had the pleasure of talking with Erik Mondrian about virtual worlds many times. We both have a passion for Second Life as a place where interesting things happen and a place to explore (he as a fox). This curiosity also developed into a deeper study for both of us. In Erik’s case, it is an MFA at California Institute of the Arts in the USA, in mine a doctorate at Lancaster University in the UK. We are both fascinated by what comes out of Second Life – the creativity and indirectly those involved – rather than being sociological or psychological studies of individuals. Consequently, the videos are a thesis produced out of Second Life, rather than being a thesis about Second Life.

As part of his submission, Erik produced ten videos and an artist statement, which I watched through all in sequence. Second Life, and the internet in general, is commonly seen as a visual space, with added music. However, there is no such thing as a purely visual medium, it is always mixed. WJT Mitchell put it a little stronger in a paper back in 2006: ‘There Are No Visual Media’.

Erik’s MFA is in VoiceArts & Creative Writing, with a concentration in Integrated Media. As a result, his approach is to bring together voice, words and visuals, though not as a straight narration. I particularly like the way his words and the visuals are combined in different ways. In some, they are directly related, in others it is not immediately apparent. I really appreciate this fluid relationship.

But more importantly, these aren’t stylised ‘machinima’, but inventive and passionate in a personal way. I’ve come to the view that ‘machinima’ is lost as a term for an artform in the constant landslide of gameplay run-throughs. This is not right or wrong, but how things have evolved. However, the creative stuff now has to find a different space, often having to hold its own in the field of video art.

To watch them all – this is the connection to the first one on YouTube. Enjoy!