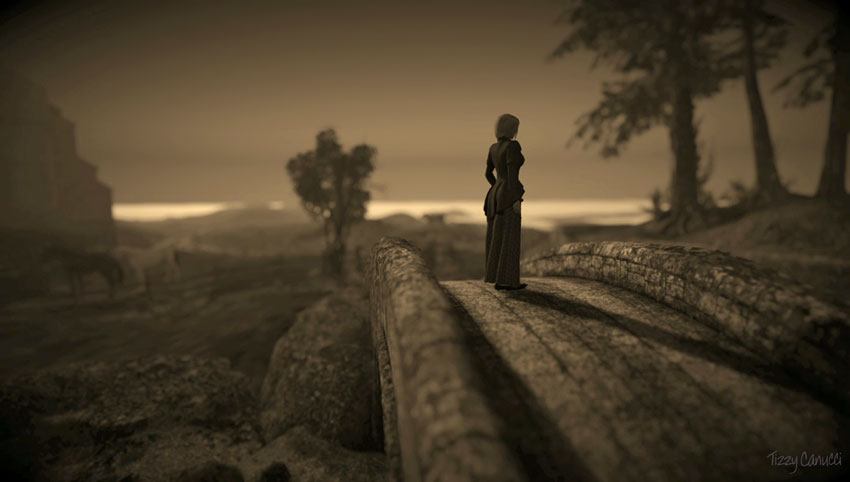 ‘A good interpretation of anything – a poem, a person, a history, a ritual, an institution, a society – takes us into the heart of that of which it is the interpretation. When it does not do that, but leads instead leads us somewhere else – into an admiration of its own elegance, of its author’s cleverness, or of the beauties of Euclidean order – it may have intrinsic charms; but it is something else than what the task at hand… calls for’.   Clifford Geertz*

How do you write in the presence of the writer you most admire? I’m fully aware that my writing cannot approach that of Edward Thomas, but I can add a perspective of time, over the 100 years since his death. If There is No Cure for Curiosity was me stepping forward to tell a wider story, my latest machinima, Edward Thomas, is me stepping back to let him speak. My aim was to retell his view of the world through his poetry in a different format, and to simplify my work to minimally distract from his.

We connected while I was doing ‘O’ level English, even though his land was a green Edwardian England (as the crown passed to King George V) and mine a soot-blackened ‘60s Lancashire. Growing up at that time, the First World War still affected the people I knew – they’d fought in it or lost relatives in it. It was still in their living memory, and that Great War was remembered as more horrific than the intervening Second World War. My father was born in the year the First World War broke out, my grandfather fought in it, great-aunts were widowed by it (at the time, but also years later from the effects of gas), spinster aunts never married because of it.

For me it has personal connections, and I mistrust the institutionalised rituals of everlasting poppies and minute’s silences that, to my mind, are depersonalised ceremonies of loyalty to a nation state’s idea of sacrifice. My grandfather never mocked the French or the Germans; that was not the way to avoid another war. We’d all suffered enough to make fun.

I wanted to frame this work with a personal introduction. I wanted to make a connection between past and present, between the poetry written up to 1917, material artefacts and autobiography. Even filming in a virtual world, I was always conscious that I should avoid simply retelling the story through the visuals. So, the visuals reflect the content of the poems but in a highly reduced form, both in narrative and visual information. They represent the idea, but do not repeat the detail.

In the run up to 2014, many historians reconsidered the causes of the First World War, and Annika Mombauer** usefully wrote a comprehensive review of the controversies and consensuses that came out of that flurry. The assassination of Franz Ferdinand did trigger a crisis between Austro-Hungary and Serbia, but a war across Europe was not inevitable. While all the major nations had partially mobilised in preparation for war, no nation wanted to be seen as the aggressor, and they continued diplomatic actions. No nation’s domestic issues were to blame, and no nation was ‘guilty’ for starting it. It was not a question of ‘sleepwalking’ though: national leaders were fully aware, but were prepared to take risks. And there were no ‘structural’ causes – people, human flesh and blood, either let it or made it happen.

History may not repeat itself, but human behaviour does. We have had the Brexit referendum that was characterised by what Britain (or, rather, England) didn’t want. A marginal win in the ballot box has been taken not as an indication of differing opinions to be respected, but as a mandate for hard Brexit and democracy as alternating dictatorships by ballot. What Annika Mombauer said of WWI: ‘for all of them, it seemed as if there was, in the end, only one way they could act… To lose face, to lose great power status, to allow the opponent a time advantage—none of these was a realistic or honorable option…’ could be applied to the present government’s attitude to Brexit.

And so, the UK’s foreign secretary, Boris Johnson, talks about ‘punishment beatings’ in the context of the French and Brexit, which Michael Gove passes it off as ‘witty metaphor’. Donald Trump conducts international relations via Twitter, inflaming China 140 characters at a time. An oligarchic alliance seems to be developing between Russia and the US, and the future of NATO is uncertain.

2017 and 1914 are very different. But the popular clamour for change over stability, and the consequent hasty planning arising from renegotiating everything, is producing fertile ground for misunderstanding and conflict.

Between 1989 and 2001, I was a county councillor, and sat through many long boring meetings. Later, in May 2007, The Northern Ireland Assembly at Stormont was reconvened, and I remember one news report in particular. The correspondent said that he was familiar with Paisley and Adams hurling fury at each other over the years – as we all were. But they had always alternated in appearances in the media – active, furious, shouting, self-righteous – they were never seen together. And here they were sat in the first meeting of the reconvened Assembly, subdued, shuffling pens and papers, waiting their turn, as in any council chamber across the UK. Bored, but no longer in violent conflict.

My experience and that report led me to my finishing lines

The price of peace
is calm talk and dull bureaucracy.
The cost of war, human lives.

The poems used (in order of recital): Edward Thomas by myself, and The Bridge, How at Once, and In Memoriam (Easter 1915) by Edward Thomas. The title of this post is from a quote by Andrew Motion, Poet Laureate, whose favourite poem is Old Man ‘because it so brilliantly proves, as do all his poems, that you can speak softly and yet let your voice carry a long way’. It is worth visiting the Edward Thomas Foundation and The First World War Poetry Digital Archive websites to find out more.

Locations were: Costa Blanco, Skybeam sandbox and LEA8, Jane Austen’s English Countryside by Armon Aeon and Tigre Milena. Western Front – 1917 – Training Camp 2 is also worth visiting as it is full of information about the First World War and the poetry.