What’s in a frame? 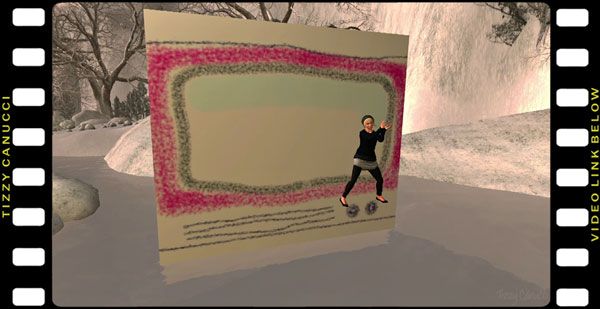 When a prominent film director takes an interest in a minor film form, he’s going to be noticed. And so it was when Peter Greenaway said machinima is ‘the visual cultural phenomenon of the 21st century’ in 2010, and when he said ‘we must dump the idea of THE FRAME – the frame – like the story – does not exist in nature’ a year later.

This blog post is about frames, and I’m going to start by thinking ‘what is a frame’. My first definition of frame is the obvious one – as a physical container that surrounds, such as a picture frame, the edges of a screen, or the edge of an online video. But I will leave that definition there and come back to it later.

The second kind of frame is social and cultural, which Erving Goffman talked about in Frame Analysis. His first angle on framing is a familiar idea from cop films – someone can be framed for a crime they did not commit. However it also can apply at a wider level, and media framing is a current issue. All newspapers have editorial positions that ‘frame’ the content they choose to publish. Various websites, for example RT, have been contesting ‘mainstream media’ as being ‘fake news’, but those websites still have a frame, It may or may not be more accurate, but it is still framed by the social and cultural values of those writing and publishing the website.

Goffman’s second angle is most relevant to this discussion. Everyone we interact with, and everything we do, passes through our lives as part of a ‘strip’. Our personal everyday experience is a lamination of many overlaid strips. This is in contrast to seeing it like a ‘film of our life’, where a camera follows us, as the centre of attention, from morning through to evening.

As a practical example of a strip, a postal worker does not appear, deliver our mail, then disappear again: our house is just one delivery point on their walk along the street. Our delivery is both in our strip and in the postal worker’s strip, but the meaning to us (we got mail) is different from theirs (this is my daily job). As a more abstract example, when we drive a car we follow a set of rules, such as which side of the road to drive on, or the function of traffic lights. We don’t wonder each day if the rules have changed overnight. Indeed, once learned, they become so familiar we forget their presence, let alone that someone invented them and wrote them down. Frames become invisible through familiarity.

Returning to that first concept of a physical frame, I was helping a curator install an exhibition a couple of years back, and we started talking about to digital art. He was once asked to remove the cases from some monitors by a digital artist. He was unable to do this for practical reasons. However, if he had been able to, a cathode ray tube still has edges, even if they are less well defined. Wittgenstein (1953), in Philosophical Investigations, argued that a rectangle with blurred edges is still a rectangle; it does not depend on finding and defining one clear edge.

It is certainly the case that one can be more imaginative with the shapes and sizes of frames, and the graphic novel is the exemplar of that idea. Comic artists are constantly trying to express ideas by changing or breaking the flow of the frames. However physical and cultural frames can exist at the same time. Western comic art is read frame by frame, progressing from the front cover to the back, but that cultural frame is different in Japanese manga, which are taken in as whole pages read from the back cover to the front2. What is a conventional frame in one cultural situation breaks the rules in another.

On a computer, the graphical user interface (GUI) is also a frame – I can see toolbars around every side of this page as I type. But I am so familiar with this frame that I forgot about it until I started to think about it – as Goffman implied I would. One sees past or through a successful GUI: it ceases to be an object and becomes part of the process integral to creating something1. The frame again becomes invisible.

The fact that frames or GUIs or frames do not exist in nature is to my mind, not relevant. Humans create culture, and culture shapes humans in a constantly interactive process. It is cultural familiarity that makes frames invisible, and therefore, ironically, changing a frame makes it more visible.

So, I am going to suggest that Goffman’s second angle, the lamination of multiple strips, is a way of disrupting frames in machinima without making them more visible.

Looking at my latest machinima, The Very Discrete is Now Visible, the visuals are almost constantly overlaid. The two video tracks are important in themselves, but they are just recordings of what happened; it is the interaction between the two that is re-interpretative and generates something new.

In my previous machinima, There is no Cure for Curiosity, the audio track is almost constantly overplayed, and I aimed to confuse and vie for the listener’s attention with an information overload. There are so many laminations: twitter streams, text from a website, text from a blog, music, textures, the creative visual work of others and a visual track, the history of dystopia, the history of Second Life, my writing on my blog and in social media, and the code on the webpage in which the video code is embedded.

Nothing is contained wholly within the frame – everything extends outside of the frame. The frame still exists, but only as an area of overlap where what I want to say is going on. Or as Alexander Galloway put it, ‘the outside is evoked in order that the inside may take place’1.

I am not suggesting that my response solves Peter Greenaway’s riddle. But I think this approach – of overlaying to generate new material – is a method that plays to the unique, limiting (and at times, frustrating) strengths of machinima.

But equally, I am not saying that this is the way that machinima should be done, of course. It is up to every artist to follow their own instincts to create work. In Surrender to Chaos, Tutsy NAvArAthnA uses internal framing extensively, for example. I look forward to seeing other people doing things I’d never have thought of. There is strength in variety, and in any case, my next machinima Edward Thomas, will be much more straightforward. Simplicity has its place too.