Cleaning up the Streets

I wouldn’t call myself controversial. I don’t go out of my way to offend people, though in my typically British way, I’ll have a quiet dig at what I don’t like. And keep my thoughts to myself a lot of the time.

You see, what I don’t really like is predictability and the anodyne. It’s kind of a waste. So when I see another sim that looked like the last one, but has pretensions to be The Next Best Thing, that winds me up and I may send it up. In my quiet, polite way. If I don’t just ignore it.

I like it when people try something different – even if it doesn’t quite work.

I really don’t want to live in a world where every day I wake up to a nicer version of the day before. That’s just like living in The Truman Show. Or like only ever eating ice cream. I want bitter, sour, tart, sharp, salty and spicy hot as well as sweet. Sometimes there are things I don’t really like, such as coriander leaf – but then I  discover one day that it really works in a dish. It doesn’t change the fact that I still don’t like it in general, but I’ve found an exception, a difference, and that’s good.

And so it’s a bit of a wind up when I see the call for SL15B, to ‘celebrate’ 15 years of Second Life in the same week as Kake Broek is banned. It’s not that I liked everything Kake did – but that is exactly the point. The work challenges, making me variously react, rethink, reject. If 15B is the same as 14B (and I don’t expect it to be otherwise), it will be interesting in parts, but mostly, well, the same. Magical crystal, pastel colours and lots of ice cream – and no capers, anchovies, coriander leaf, chilli, or lemons. 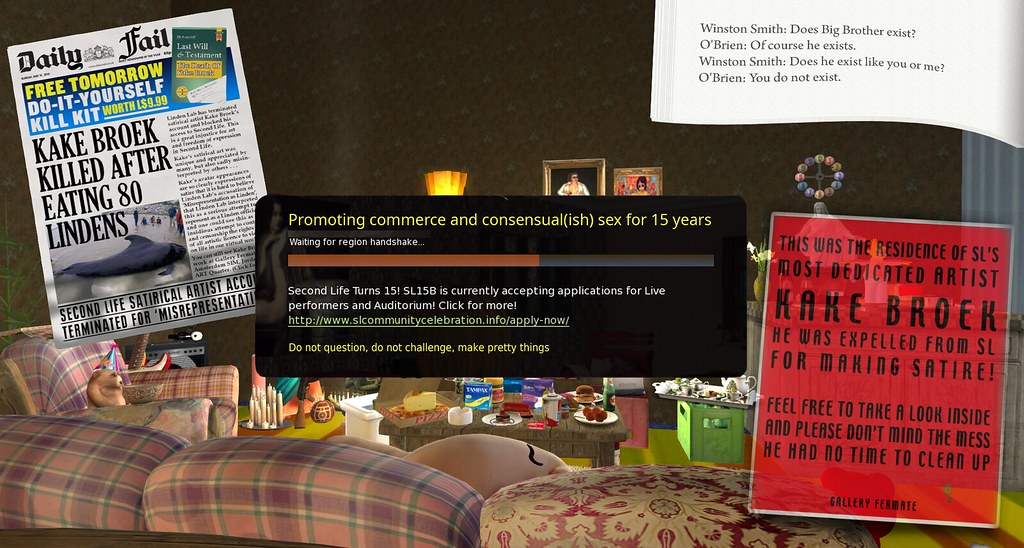 For a more incisive and cutting commentary (as you would expect), see SaveMe Oh’s blog post.

1 thought on “Cleaning up the Streets”