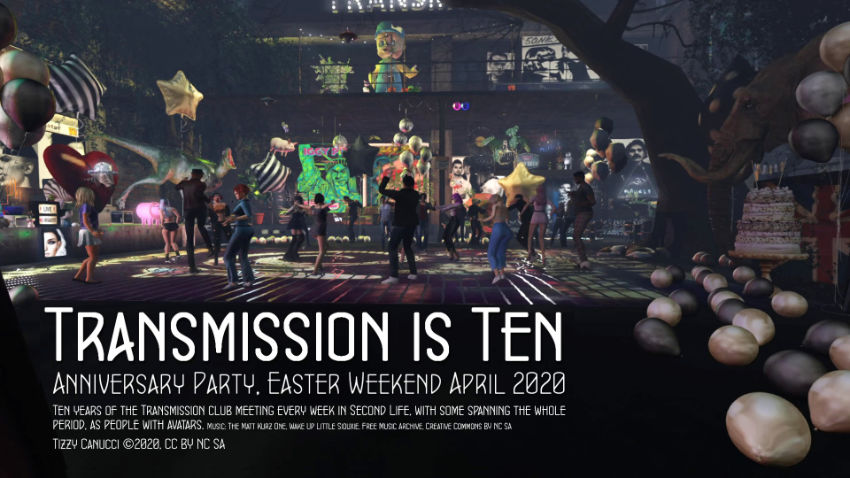 I wondered about this video… it’s so much more ordinary seeming than usual. Does it fit on Vimeo? Flickr maybe, as that’s more about personal records? Which is not so much a judgment about quality, but about whether it would be the right place. But here it is in the usual place on Vimeo. Yes, it is personal – but it marks time spent together. That any communal space exists for ten years is an achievement anywhere. Online, well on the one hand there is less expense, but on the other hand it marks a long term commitment that is rare.

Technically it is imperfect, as the frame rate collapses with the number of avatars present that are ‘doing their own thing’. Browsers limit the number of avatars that are shown in detail, in my case 16, and the frame rate was dropping to less than 20fps, when 30fps is the ideal for video. But this is the compromise of having real people doing what they choose in one virtual space, and long may it live.

So, Second Life has been around sixteen years, I’ve been in it for eleven years and Transmission ten years. Clubs are an important aspect of Second Life, three dimensional spaces where avatars gather, with shared interests in music. It is a place I have been going to most Friday and Saturday evenings for four years, for the shared music and friendships. Living in a rural area where I have to drive, partying into the night has limited options! But it is people from around the world that gather there.

Online, this reflects a long time, and says a lot about the kind of space Linden Lab created. On the other hand, I have a Facebook account that I set up shortly after going into Second Life. But I’m well aware that I’m only permitted there if they can drag my data to sell to someone else. And I know the difference from when I first started there. Facebook creates the algorithms that determine whether what you put there is worthy of sharing to your friends, and that has changed. The degree to which I can assert my own chosen identity there is diminished. It is an identity filtered to suit their capitalist needs.

Second Life is still much more the space of your choosing. For sure, social conventions influence, and even constrain. A lot depends on what is on offer in Second Life Marketplace, or the current technologies – most notable is still the shift to mesh and its evolution, with Bakes on Mesh last year. And transgression has its limits. But for a bunch of people to decide to set something up on the internet, and still think its worth doing 10 years later, with no financial reward? And they are not a complete exception by any means.

So, here it. Everyone of those avatars represents a person. The music is my choice of Creative Commons material, but reflects the kind of music played there. People marking time spent together, as they do.

Music is The Matt Kurz One – an interesting guy who plays everything himself, simultaneously. The track itself was a choice from Free Music Archive, and very much in the spirit of Transmission.

1 thought on “Time Spent Together”