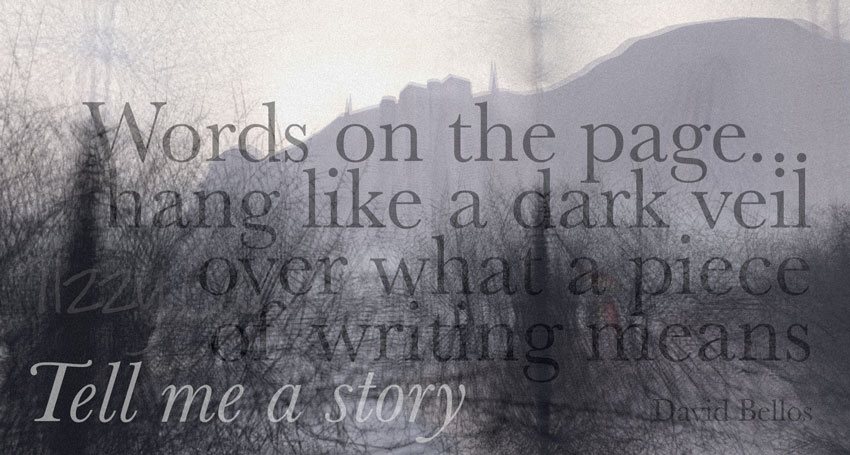 At the current installation on the Delicatessen art sim, Meilo Minotaur asks visitors to Tell Me a Story. All the characters on the island have corresponding avatars one can pick up by the entry point. They do not have names. The scenes are separate. So how are they linked?

This is the starting point. In my videos I show things but I very rarely tell stories, and if I do, they have the sketchiest outlines. I know that the viewer will fill in the story, because we always fill in narratives when making sense of the world.

So, I still don’t really tell a story in my latest video. I create a mood, a sequence, a connection of visuals and sounds. I have ideas in mind – half-stories maybe – but I don’t know whether you will read the same half-stories. The words are a flow of consciousness, from a list made from things on the sim. The sound of the words rather than their meaning tell me how to arrange them: ‘Flowers read towers revolving around birds and strange mountains’, and ‘cages’ cold creatures jerk’. They too tell half-stories.

And so too the music, with three bassoons deep in conversation with each other.

I leave the characters without names still and ‘innominate’. But innominate has a second meaning, besides without a name, of ‘not classified’. This equally applies.

So to conclude, I’ll call on David Lynch, for whom conventional narrative with logic and legibility is not the aim. Instead, he seeks to create a sense of disorientation and a shadowing confusion that shows, hides and reveals rather than telling. ‘In Lynch’s universe, worlds – both real and imagined – collide’*.

Tell Me a Story is currently installed on the Delicatessen art sim, by Meilo Minotaur and CapCat Ragu, in Second Life.