Making a Symphony for a Lost King 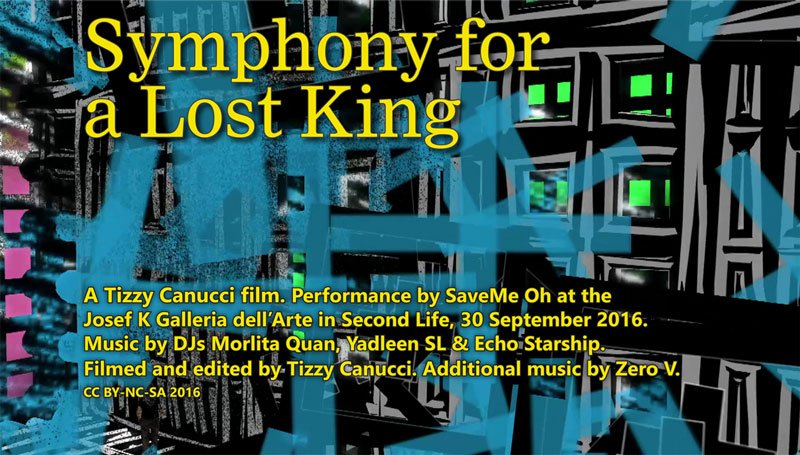 This time I thought I’d talk a bit about the process of putting together a machinima, using the example of my latest, Symphony for a Lost King. The program I use is Lightworks. It’s available on a two week renewable free licence. The limitations compared to the full price version is just in the output options. As output to Vimeo 1080 has been one of the free options since the beginning of the year, it is good enough for my purposes. The FX tracks at the top are for effects – titles (green) and blends (light blue). The light blue bars show which video tracks the FX are acting on. Below the FX tracks are the video tracks (V) and then audio tracks (A). I could perhaps have been a little more compact with the tracks and just had 4 or 5 video (V) tracks and 4 audio (A) tracks. As the audio is stereo, A1/A2, A3/A4, A5/A6 are stereo pairs. Within the audio tracks are yellow lines, and these are the fades with in the audio track. As there is another less visible way of doing this, you can’t see them all. I usually rename the clips, but the clip thumbnails (upper left) were clear enough for this job.

The performance by SaveMe Oh ran to three hours, with the three djs taking an hour each – Morlita Quan, Yadleen and Echo Starship. I filmed 31 clips, of which 17 went into the final video. Clips get rejected for various reasons – they repeat another one, my camera control goes off, objects are badly rezzed, frame rates drop too low, or simply they don’t fit within the framework of the video. I do not make documentaries that simply record the show. Instead I want to add something of myself to the work, an interpretation of the event.

The video is in four sections – movements – and you can see the titles marking the transitions in FX2. A long sweeping flythrough accompanied by music at an adagio tempo gave me the idea for the symphonic structure. This forms the third movement, which is almost unedited. The other movements are built up from roughly chronological clips within the three hour performance.

So here is the final product – what the picture above looks and sounds like. Hope you enjoy it!

Symphony for a Lost King from Tizzy Canucci on Vimeo.