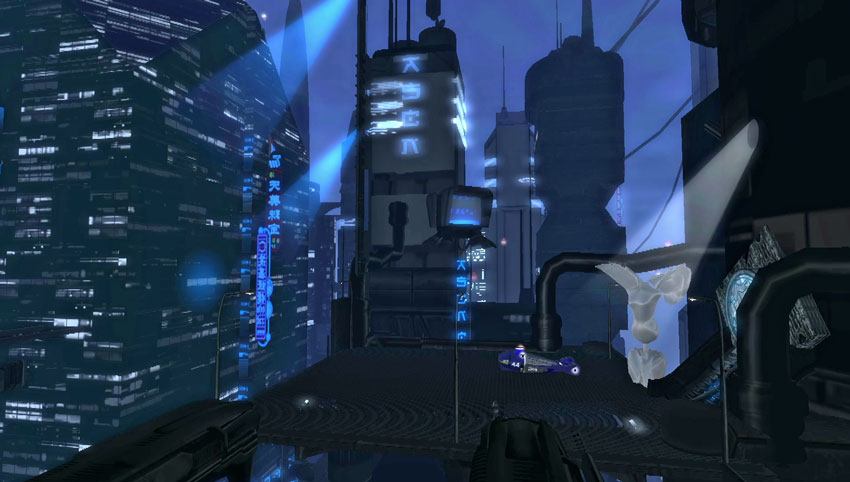 Insilico is closing. I’d long wanted to make a machinima there but I couldn’t get an idea that didn’t seem clichéd. I felt the need to do something to record the sense of place, and not simply to make a travel documentary. I wanted to extend the ideas and portrayal of dystopia within Insilico to contemporary experience and newer ideas of dystopia.

This post is about the making of, and the ideas behind, There is No Cure for Curiosity, and I’ve broken it into four parts:

Visual and my rebelling Audio

The visual content is exclusively of Insilico, but the audio is mixed, incorporating ambient sound from Insilico, spoken information drawn from websites and social media, and music. Although the video was intended for posting on Vimeo, I was aware that some other sites, including Facebook, play videos automatically and silently while recording viewing data. This creates a paradox; content is being withheld and at the same time further data is being collected. In this process, audio is neglected and regarded as disposable, despite speech being central to the communication of human ideas, and at the same time raw data is being created. I deliberately made audio the equal of visuals in this machinima and while best together, they can stand as works on their own. The core thread of the audio is the narration of the ‘Story and Background’ of Insilico from the blog website running relentlessly throughout in the left channel, with commentary, twitter chatter and the quotes of Skills Hak taken from her closing blog post in the right channel in different voices. The aim was to produce something that could not all be attended to at the same time – confused, disorientating, irritating, not always understandable, on the point of collapse – data in excess.

I agree with the view expressed by Kurt Vonnegut1 and Aldous Huxley that science fiction is not so much about the future as our present fears projected forward. Data failure and disconnect was an issue for technology in the late 20th century as embodied in the flickering CRTs (cathode ray tube screens) of Insilico. However, in the ‘always on’ society of the 21st century, data in excess has become the issue. The extreme case is the DoS (Denial of Service) attack where a website is swamped with data. Skills Hak admits to indiscretions in building the Emerald viewer to aid in constructing Insilico. That viewer was closed down by Linden Lab after another of its developers built in code to generate a DDoS (distributed denial of service) attack on another website. This caused a scandal within Second Life as users unwittingly generated the attack when opening the Emerald viewer. However, this is very small in scale compared to today’s concerns. The DDoS attack on the Dyn servers during October 2016 was the largest in history, and was directed from around 100,000 sources in the ‘internet of things’ bringing down sites including Twitter, the Guardian, Netflix, Reddit and CNN. The possibility of significant DoS attacks orchestrated by states is now establishing a new Cold War with current news commentators speculating about Russian interference in the recent US Presidential elections.

These themes reflect changes in power and control. 20th century dystopia typically centred on a singular big organisation or leader demonstrating overt control, for example Aldous Huxley’s World State in Brave New World or George Orwell’s Big Brother in 1984 which reflected that century’s experience of totalitarianism. Today’s descriptions of dystopia reflect power being exerted in distributed, multiple and covert ways and in overwhelming quantities. There are connected concerns around trolling and self censorship: ‘Long confined to the fringe, this year, the trolls took center stage… On the internet, all ideas appear equal, even when they’re lies… Social media exacerbates this problem, allowing people to fall easily into echo chambers that circulate their own versions of the truth’. The twitter feeds in my machinima represent this new dystopia; social media, voluntarily selected, intended to narrow attention and heighten emotion, segregated out of a flood of surrounding information.

One set of tweets was filtered using the search term ‘augment your reality’, using text that was taken from under an image of a leggy android. The ‘sexy robot’ is a recurrent theme in Science Fiction movies which are ‘supposedly futuristic, yet most… peddle antiquated myths and gender stereotypes’. Her eyes are replaced with blank blocks, repeating Greek mythology – Tiresias, blinded by Hera for saying too much about what he knows about the present, is compensated (or augmented) by being able to see into the future by Zeus. And while the resurgent technologies of augmented reality and virtual reality promise increase immersivity and presence, they do so by shutting out the surroundings. The VR headset is voluntarily worn, to narrow attention and heighten emotion. In the machinima, the narrowed twitter stream flows by her blanked eyes, finishing with two appropriate questions: ‘If you had a choice to au[g]ment part of your life, would you choose you[r] “reality” (mind/soul)? Hmmm… Do you even augment your reality bro?’.

The work also raises questions of narrative within games. Time shifting is essential to science fiction2 and the ‘Story and Background’ in the left channel describes a present as a future-that-has-already-passed, situating the player at a point in the future beyond that described dystopic present. This establishes a setting for social encounters and personal experiences. The players themselves establish biographical and social narratives that bridge and link outside of game time.

This may be through personal sites such as blogs, posts about Insilico in shared social media sites such as Flickr or Facebook groups, or posts by the Insilico twitter account, or just one element of a wider experience of Second Life such as my machinima on Vimeo.

This constitutes a complex weave of narratives produced by many people relating to events in multiple spaces, in different time scales. The complexity denies a hard division between games as ludology and stories as narratology that was put forward early this century, most notably by Eskelinen, Aarseth and Moulthrop. In 2016, the more open and questioning response by J Yellowlees Douglas3 to Eiseklinen  better accommodates the developments of social media, and the generation of derivative and artistic works from game worlds; ‘games use narratives as affective hooks… [and j]ust as film is more than the sum of mise-en-scene, sound and narratives, interactives can be both more than the sum of game or narrative…. A game? A narrative? Or something else altogether?’

‘Interactives’ is not a term used now, but that ‘something else’ is more significant – a form of inter-texuality where images, moving images, games worlds and written experiences are expressed in multiple ways and spaces. But this also exacerbates the tensions and contentions in cultural ownership between games designers and users. Changes in Second Life’s Terms of Services generated controversy three years ago. Skills Hak’s post refers to these issues, and quotes from her blog are set against, and mirror, descriptions of dystopic Insilico. The title of this machinima, There is No Cure for Curiosity was hacked from this post, as a symbolic appropriation. That said, Linden Lab have permitted and encouraged inworld photography and machinima-making in a way that other games companies have not.

Aesthetics, or why it looks how it does

After the previous discussion over theory and politics, I want to makes some final comments on aesthetics. On hearing Insilico was closing, I just went over and got a lot of shooting done. I knew the place already, so I already had some ideas about where to go. But this placed me where I often am with machinima making – a hard drive full of material that I then review and look for patterns and connections.

I talked about content of the audio earlier – that sense of incessant movement, density and data excess was important aesthetically as well as in meaning. Everything was built around the left channel audio.

In the first section the music and speech is similarly paced, and the visuals are cut to this rhythm, though not at regular points. In the second section, the speech continues at the same speed, but the music pulses at a slower rate and shifts to the minor key, establishing a more reflective, melancholic mood. I built more speech into the left channel and stronger ambient sound in this section, creating unsettling rhythmic patterns and discordances, though the visuals are more regularly cut. The dissolves into and out of a cut is a technique I like to use as the slow blink to black seemingly slows time, and also in this case diverts attention to the audio. The slow ‘blinks’ combined with the pulsing music and a sequence of smooth fly-throughs creates an almost dream like movement.

There is a change in key in the music on the final clip, as the camera flies through the one area of green vegetation. This happened entirely by chance, but it was retained and built on as it conveniently preceded a change in topic and visual material. The next spoken section of ‘Story and Background’ was about Mars, the red toned visuals of the surface visually discordant to the blues of Insilico. Full screen, this change was too jarring. However, placing it in a quadrant with feathered edges, while constantly varying opacity and size created the effect I wanted.

Finally, Insilico is, or maybe by now was, one of the great builds of Second Life. There is talk of preservation, but I have mixed feelings. As a former modelmaker, it seems a shame to see it go, but as a digital artist, the transitory nature of the medium is what makes it distinctive. Can it be turned over to an online version of the National Trust, or would that negate what it really is? Could digital tourists breathe life into it, or would it need the heartbeat of role-players? Or like any dystopia, does it presage its own mortality?

3 thoughts on “Curiosity, Dystopia and Insilico”