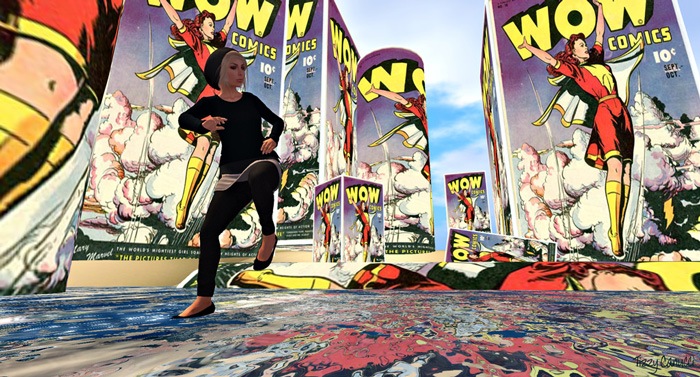 Kite: the name of my latest video!

It’s been a busy week with report writing, being away, and high winds and heavy rain in real life. But I’ve managed to get a bit of time in Second Life at the weekends to look at some new places.

The one thing that got left behind in all this was a write up about my new video, Kite, on Vimeo, so here it is now. I’ve also just put it up on Youtube [edit: and taken it down again*], but Vimeo is easier to upload for me and streams better, so I favour it.

Kite from Tizzy Canucci on Vimeo.

There is a bit more experimentation again with this video, with all the set work (apart from the winter scenes) done by myself. For the first time, it wasn’t based on a sim created by someone else. That’s not good or bad, just different.

It’s still intimately built around music, the track being Mississippi Kite, performed by Amanyth. It wasn’t until I came to look at the credits that I realised that it was a Kirstin Hersh song again. The trailer for a previous video of mine, Less than Zilch, used a track by one of her bands, 50 Foot Wave. The dance animation was selected specifically to fit the music, the set design using lines from the song as ‘kickers’ to generate starting ideas.

On uploading this video to YouTube, I find that there is another copyright claim against my work, Less than Zilch. I have contested it:

“This music, as clearly stated in the information is ‘Sally Is A Girl’ by 50 Foot Wave (Creative Commons BY-NC-SA 3.0) available at: http://freemusicarchive.org/music/50_Foot_Wave/Golden_Ocean/Sally_Is_A_Girl. Follow the link. It’s there.

I have email correspondence with Kirstin Hersh, who is the contact within the band. She is perfectly aware that this piece of music is being used this way.

This is the SECOND claim made against my work that contains music published under Creative Commons. I publish my video work under a Creative Commons licence, and it is both a requirement and a pleasure to do so.

I note that you have changed the terms under which this video is available, and I would respectfully point out that as a publisher of this work through your platform, you are now in breach of the terms of the Creative Commons conditions on the music as stated on the above website.”

I’m rather angry that YouTube does this. They did not inform me (I’ve checked my bin too) so I have no idea how long someone has been monetising the work. I’m very close to pulling all my work off YouTube and just publishing on Vimeo.

Update: my appeal has been rejected. I have now found this track under Creative Commons on the band’s own CASHMusic site as well. I have contacted the artist again saying what’s happening. We’ll see.

Final update: I have removed the video from YouTube, a month after discovering the claim. Just because a song is Creative Commons does not also mean it can be published under a different license on a cd – this has happened to me before, and I suspect this is the case again. The terms of the appeal are so heavily weighted against my claim that it is simply not worth it. Even if it comes down to an equal claim, I give all my personal details to a third party who is a claimant with a financial interest in the outcome, and who is also the final arbitar. So, I have now taken the video down. I needn’t. I could have just let it be monitised by Merlin Beggars, but it is a matter of principle. Not that YouTube or Beggars would ever give a damn.

* Final final update: 4/12/16. Another false claim on music on another video. I’ve taken everything down off Youtube except ‘What Second Life Means to Me’. Really? Youtube just want you to put copyrighted material up so they can take their cut of monetising it. Creative Commons means no money for them, so they have no incentive to get it right. ‘Don’t be evil’ used to be Google’s motto.