Mortality, the Dead and Not-dead of Virtual Worlds

I’m looking at ‘Sacrifice’ by Osferatus Haven, at Morpheus. It’s a set piece diorama; flickering flames, but otherwise it’s a static installation. A couple of blood-lusty creatures face each other while desperate hands reach up from the ground and corpses lie round and about. 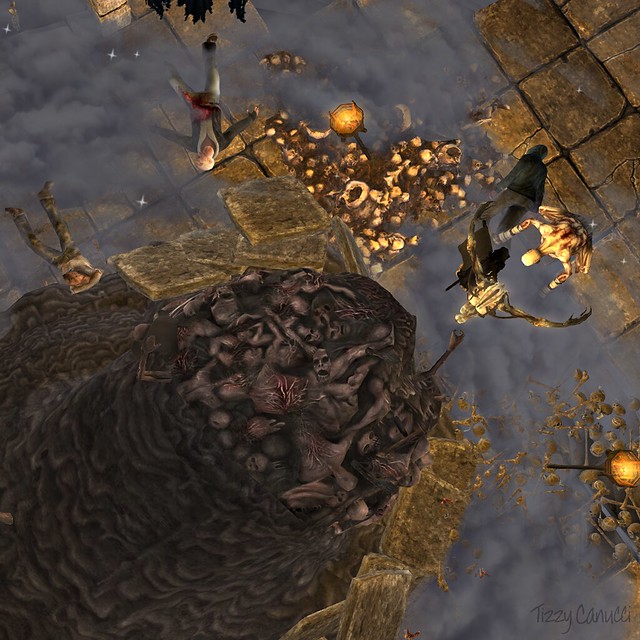 By coincidence, I’d come across a journal article1 a little earlier about depictions of death in film. Real life deaths, even violent ones, are often quite undramatic, more of a fading away. In contrast, deaths in film are graphic and explicit, and are intended to show a depiction of unequivocal death. It is not enough for the character to be dead – there needs to be an unambiguous representation of death to leave no doubt. The most irrevocable death of all is the head-death. There is one head-death in ‘Sacrifice’, where a decapitated body leans against a pole, and other bodies lie around, looking merely quite dead. 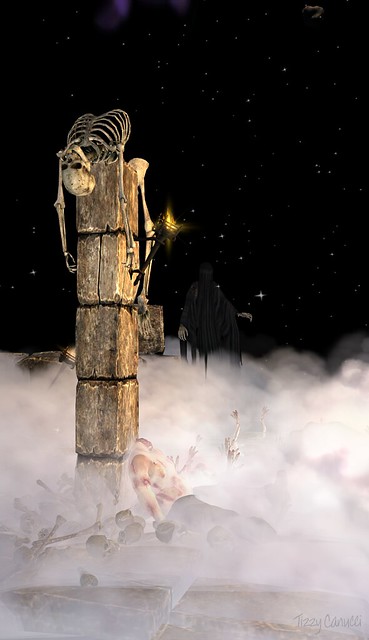 Shortly after I arrived another avatar appeared, qωєєηιє. Her title was Like a Boss, and she politely asked if she was in the way. ‘No, you are fine’, I replied. Unlike me – I was dressed more for a sunny day in paradise – she was well-prepared for a trip to the dark side. Our discussion prompted a suggestion from her that I could be a virgin sacrifice. Hmm. Unlikely.

Life and death in a virtual world is something different again from film. qωєєηιє offered that I could derender 2 her and I offered the same in return. There is the ability to derender others and mute them – erase them from our world, permanently or temporarily – and they cease to be in our version of the virtual world. But while we can derender each other like minor gods, we know that the other still exists, both as a virtual self, visible to themselves and others, and as a real breathing flesh and bone human being on a computer.

The characters lying around in Morpheus are not even avatars. They were never alive even in a virtual form, let alone as a real human being at a keyboard. As such, this representation of death is twice removed; the skill we see is that of a wax-works maker, who we admire for their craft rather than their ability to suspend disbelief, as a horror film director aspires to do. I never felt the fear of being dragged down to hell by the groping hands, or of being a virgin sacrifice. It is rather more like a waxworks where you can safely rub shoulders with people less attractive than a run-of-the-mill celebrity. 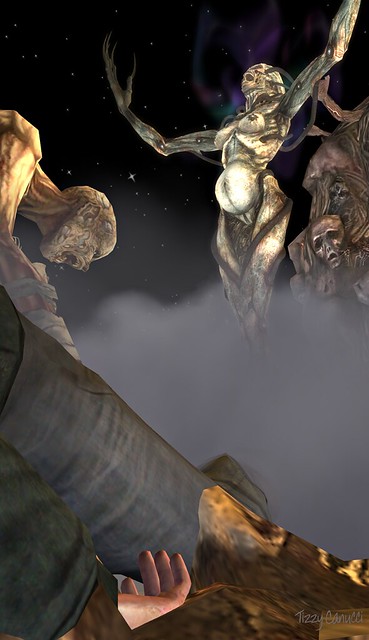 Virtual Worlds are atypical in the gaming program world in that they are social places where killing people is not usually a part of the game. If it is, it is part of the ritualised rules of a defined role play area. Indeed death is more visible as the physical bodily death of the person behind the avatar, marked by announcements and memorials. People willingly break the surface of the digital illusion to recognise the mortality of flesh and blood that lay behind and is now gone. That genuine human concern is reinforced by the annual fundraising events in Second Life for the American Cancer Society under the banner of Relay for Life.

But back to my conversation with qωєєηιє: “[05:10] Tizzy Canucci: You just wandered into my shot – but that arms outstretched pose looked great! I’ll have to go through everything I’ve got and choose a set (and I have such a backlog atm) but would you mind if I put it on Flickr at some point?”

Morpheus I: photo taken in Second Life by Tizzy Canucci

She replies – of course not – with a big smiley emoticon. I’m sure qωєєηιє is like a boss somewhere – but it’s not here today with me.