Computer Games and the Village Myth 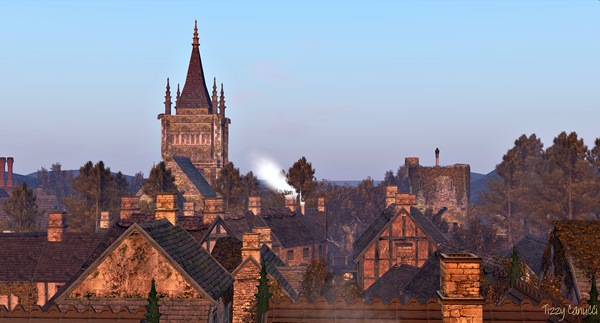 Start the Week, a programme on BBC Radio 4 staged an interesting conversation on Monday (now on iplayer 1) based around a book by Susan Pinker; The Village Effect: Why Face-to-Face Contact Matters 2. In it, she argues that social isolation – measured in absolute terms and not how people perceive their own position – reduces lifespan. Face-to-face is vital, she claims and anyone who thinks that online contact can replace it is living in ‘social la-la land’. It is a modern day lesson in the religion of psychology where ‘ought’ and ‘should’ are frequently deployed, and she has backing from the past – when St. Matthew wrote ‘Blessed are the poor in spirit: for theirs is the kingdom of Heaven’, he clearly knew that the socially isolated would get to the pearly gates first.

It inevitably meant that Nicholas Lovell, a games designer, and Sam Riviere, who has produced poetry out of internet searches, had to put the other side of the argument, even though they took a more balanced approach. Nicholas viewed the screen as an enabler, a bridge from the virtual to physical, and a place of community for gender dissenters, the shift workers, those who can’t conform and the odd ones out, and who feel excluded in ‘the village’. Villages are not liberational spaces, as a rule, they assert norms through social conformity. For Sam Riviere, ‘existential loneliness can be a useful state for a poet’. That I know: writing is a lonely occupation.

Daniel Dennett, the philosopher, was the fourth guest interviewee, and was also rather pessimistic about the virtual. However, when asked, he answered that he was ‘not a gamer for one reason or another’, as if added reasons further legitimised his decision. Susan Pinker, when asked the same question, said ‘ummm . . . . . .   no I don’t play computer games’, then switched the conversation straight to limiting the time children have on-line in order to protect them. Which is one of the most effective rhetorical diversion strategies there is.

But the biggest error in all of this is to equate the village and face-to-face contact. Fundamentally, ‘the village’ is a romanticised urban concept, rooted in a mythologised past – a ‘golden age’ of stability and idealised social relationships. This ‘village in the mind’3 creates a distinction by associating territorial attributes with particular social rituals, interactions and performances. This romanticisation conceals inequalities and poverty while mythologising the amount of personal contact and ‘community’, and commodifies the rural into an idealised purchasable idyll for the urban dweller 4. This supposed romantic richness is more valuable than the need for technology for those who live there; this is the attitude of mind of urban decision-makers who do not envisage superfast broadband as an infrastructure project to enable equal access. As a result, rural areas are left to scrabble to get their exchanges fibre-enabled through whatever means they can.

I live in a rural area, but it isn’t a village, because even in rural areas not everyone lives in a village. In any case, what qualifies as a village? Not every village has all, or even any, of the village green, shop, pub and church that the idealised village has. When I am out, I wave to people as I pass them in the car, occasionally stopping if there is something immediate to talk about; I do not lean on a gate finding out about everyone else’s lives as they amble by with their shopping baskets. I do not go to the nearest pub, because I don’t feel comfortable there, and I don’t go to church because I’m not religious.

I have made friends primarily through what I do, some of whom live nearby, and many live at some distance. This idea of true community as something inherently rooted in place, as if it has special properties, is a delusion. The countryside has been in constant change with communities reconstructing themselves in each generation 5. Doreen Massey asserted that ‘places are processes’ and are full of internal conflicts – they are never singular 6. The politics of exclusion exist even in your idylls.

Sam Riviere commented that ‘poetry comes out of the body so I think its interesting to think about how language that seems so disembodied online . . . (you know, actually, its site) . . . its destination is always the body, and that’s something that poetry can reflect’. The brain is illusory, it interprets our senses and we do not experience them in a raw, unmediated state, they are always interpreted. An experience in the virtual fires the same brain cells as the ‘real’ thing does, and virtual reality creates the same responses, they are perceived in the same physical ways 7. We have all always known life as embodied beings, and we reimagine ourselves and are aware of others as embodied even when we are just considering their thoughts, words and images 8.

The fear of a degeneration of the next generation has been a repeated theme over centuries 9. In order to protect society from this, our children need to be kept away from the new, such as Susan Pinker’s ‘too much internet’. The next generation may lose and not be able to do what this generation values, for example to read a map, as Daniel Dennett fearfully claimed. This loss of ability (which coincidentally included poetry) concerned Plato in Ancient Greece, where he feared the rise of writing and literacy would lead to the decline of the embodied, oral tradition and the collective memory 10. In the 21st century, Ancient Greece is known and valued precisely for its surviving literature, including, ironically, Plato’s concerns.

Anne McElvoy swiftly pointed out that the nature of maps is changing, and children will adapt to the time they are living in. They do; humans are nothing if not adaptable. And technology displaces, it does not replace 11. The contemporary artists, critics and theorists who are engaged with technology are mostly neither cyber-enthusiasts not Luddites, but rather are deeply fascinated 12.

And just for the record, people in villages and rural areas use technology and the internet too. Even if we are still denied superfast broadband.

On the programme:
Susan Pinker is a developmental psychologist and award-winning newspaper columnist. The Village Effect: Why Face-to-Face Contact Matters is published by Atlantic Books.
Nicholas Lovell is a games designer and a gaming enthusiast. Nicholas is the author of The Curve and runs a consultancy, Gamesbrief, on the business of games.
Sam Riviere is a poet. Kim Kardashian’s Marriage is published by Faber & Faber.
Daniel Dennett is a philosopher, writer and cognitive scientist.
Presenter: Anne McElvoy