Last year I wrote a blog post about Three Waterworlds, in terms of their place as liminal areas or borderlands in human imagination. So, I was very interested to see that this same topic was being explored on LEA24 in Second Life. Here, the artist, Lemonodo Oh, has used tiles of google maps to create a piece of coastline – the broad contours of the landform have been built up, but the surface features and the buildings have been flattened as the textures come from 2d maps. Borderlands LEA24 from above

The above shot is intended to highlight the illusion rather than work with it. But for me that’s mostly what I get from it, as it highlights the interpretative nature of all mapping exercises. They are, by definition, scaled copies of the original, designed to show navigable features – hence the road with the words written along it and the low rezz quality. The map also ends arbitrarily and abruptly along a straight line – a reflection of print technology – rather than being blended into the backscene or rolled over to create a smoother skyline. 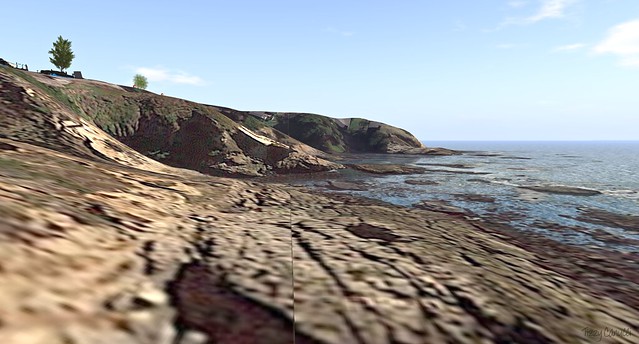 From this angle the skyline looks more natural, except for the sharp break line where the tiles meet. I like this feature: it highlights for me that are two borders here – a natural one between land and the sea, and an artificial cartographic division that cuts with geometrical regularity across the untidy natural border.

There are photographs of different coastlines around the sim that appear as you get close, which is an interesting feature, but I wasn’t sure what it added. Unfortunately I’m left with the feeling that I’m missing something – I wanted it to speak to me more than it did. As a direct comparison with somewhere I have been to recently, and blogged about, Isle of Grace gave me much more intense and immersive experience. As I talked about in another recent post, I think this one of the challenges for ‘art’ in Second Life: when the immersive capacity of sim building gets so good, where can art go? Where is the space for art to be ‘extra-ordinary’ and be meaningful or transcendental? 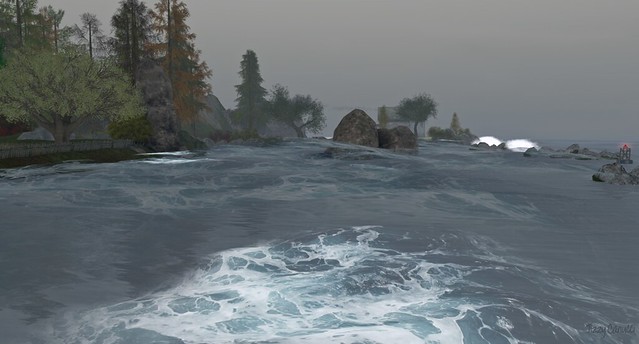 ‘Rolling Sea by Grace’, by Tizzy Canucci, on Flickr