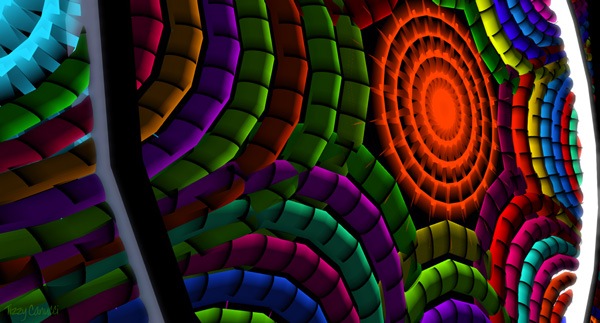 It’s an interesting quandary. What is at the root of digital art that comes out of virtual worlds? Part of what I like about photographing (or image capturing – that debate’s for another day) virtual worlds is the time spent looking. The mindful approach I talked about in my last post.

I went along to the opening of a new exhibition, Art is Geometry, by Solkide Auer and Ranadeep Resident, which opened at Trésor de l’Art – Spazio Arte on 8th January 2015. There were lots of people there, and a dj providing a sound stream to compliment the artwork, but the imagery was quite abstract as shown in the photo above – quite different from the image below.

Which is more abstract? It’s tempting to suggest the first place, even though I already know what a cube looks like. It may a frame rather than a solid, but I can cope with that fine. Indeed, as a very regular shape, it doesn’t even have the unpredictability of a cuboid based on rectangular faces. I love the lighting though… those shadows. But is it really abstract, or simply geometrical? Well the show’s name is Art is Geometry, so that indicates a view on the artists’ part.

So what about the image shown? I recognise a path, a bridge, and bamboo, and the light half way down the path. See! I can name them from my catalogue of familiar things in my head. Not abstract.

I have never seen a path with quite those curves, going to that kind of bridge, and certainly not through bamboo that tall, in winter. And that bamboo – it’s not the leaves I know from the plant down by the river near my house. These are leaves someone has produced on a flat plane; not even a photographic reproduction, but an artistic representation, which has then been arranged and projected as light from a screen.

Sometimes I wonder what makes me spend time looking at representations of the outside world in Second Life when I live in a house that overlooks a nature reserve and a nationally recognised site of scientific interest. And I think it can be explained at least in part by this; 35 years ago I bought a classic flower identification book (was republished as a second edition, but now out of print again).

It’s not photographic, and despite being a photographer by nature, I don’t think a photographic guide has bettered it. There is something about illustration that can get closer to the essentials and the feel of the natural world than a photograph.

A photograph is taken of one example and includes every detail; an illustration can be representative of everything and emphasise what is distinctive in general. It can be so easy to become so familiar with objects that we name them and do no more. An illustration can be startling in its visually descriptive clarity, making one aware of what one has taken for granted. I learned to draw in biology, peering down a microscope, at cell structures that were unfamiliar – it all seemed so abstract. Sometimes abstract is simply what has yet to become familiar.

And I think this is what I love about Second Life – not so much the generation of something uniquely computerised (interesting as it is) – but the reinterpretation and re-envisaging of what is around us in the real world. Historical, natural, architectural, fantastic, from the future and of the past – and all of it reimagined. Much of that is by transforming the familiar and real; condensing it, making it abstract, making it unfamiliar, and making us see it anew.