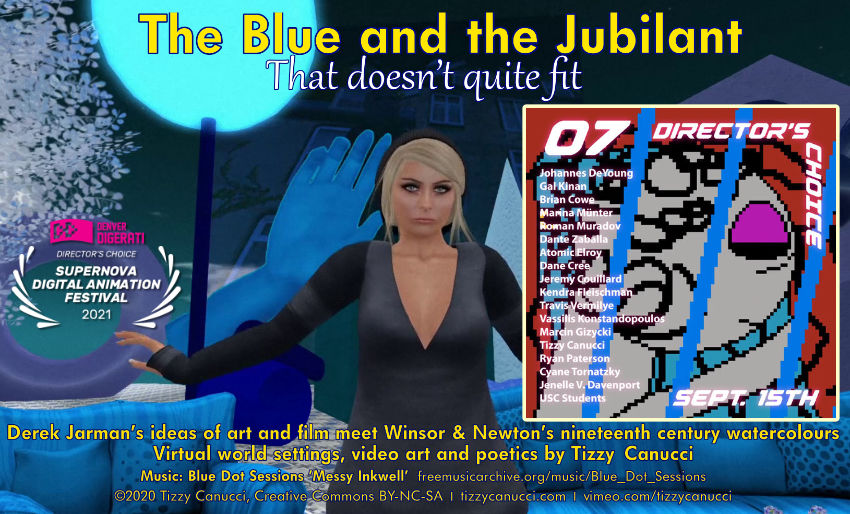 Running a bit behind time on this one. But I finished work yesterday with one job, and start another next week – the mundane realities of life getting in the way. This year I had two machinima/ video art pieces selected for Supernova. I’ll start with the second.

The Blue and the Jubilant I wrote about in a previous post and will be shown online from the 15th September online, as well as on-screen in Denver. It is in the Director’s Choice category, the trailer for which is below:

The Blue and the Jubilant echoes together the 21st century virtual world of Second Life, 20th century filmmaking as envisaged by Derek Jarman, and some 19th century shades of watercolour blue made my Winsor & Newton. It is about bridging creativity and technology across time – ongoing parts of human culture, that continue to build on the past. It is not about making a definitive statement, but an ongoing conversation. The definitive statement is the lie of commercial art and NFT that are asserted as tradable commodities and (intellectual) property. For sure, copyright matters, but that is more about making a living from one’s own creativity, rather than making money off someone else’s.

So here is The Blue and the Jubilant. It is Creative Commons. Share it, rework it, reuse it, live your life with it. Just don’t use it commercially without asking.

The other selected work, in the Bodies in Motion category, is Tree of Life of Avatar. Features the wonderful art work of Meiló Minotaur, again coming out of Second Life. ‘The Tree of Life is an ode to Nature and its resilience. Despite a dark present, he is confident that man will follow a path that will lead to his regeneration’, says Meiló Minotaur of her installation, Árvore da Vida.