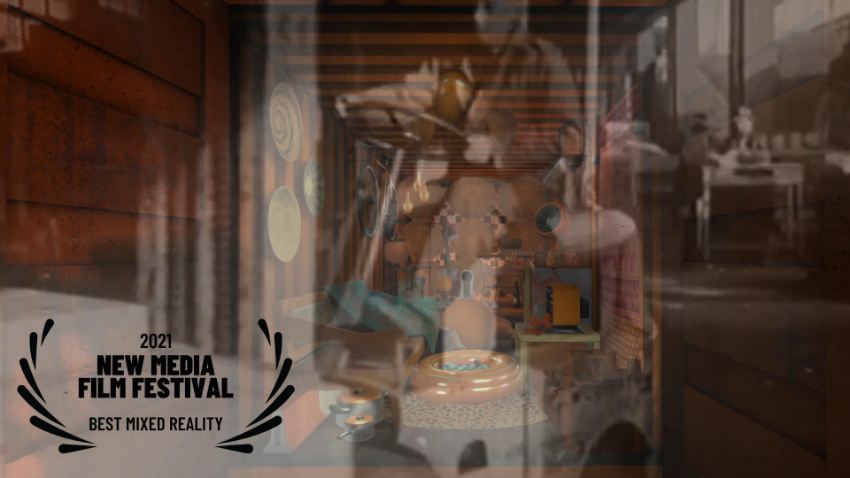 More things building on previous work! The New Media Film Festival was held in Florida last week, 2-3 June 2021. My work, The Safe Shipment of Small Cargo, had been accepted. I first made the original version of this video art/ machinima in 2017, but it was never quite what I wanted. I was using older software too, which limited what I could achieve. However, the art exhibition reopened during 2020, so I got new material to add to the video, and made some good improvments..

The good news is that it won Best Mixed Reality in the festival. The description fits perfectly, as I was blending digitised archive film with digital virtual world material.

The archive film I used was Outgoing Cargo!, made in the 1950s for the National Association of Manufacturers in the United States, and now on Internet Archive. The film was promoting the superiority of American capitalism, and introduced the viewer to the ‘steel container called a cargo van’ as a new innovation for shipping.

The Second Life material was video I made of an exhibition of artworks in containers made by Marina Münter. It was first displayed at Berg at Nordan Art in September 2017. During 2020, in was installed in Art in the Park in June, then homed at Marina’s own The G.B.T.H. Project during September.

The way the two are drawn together plays with ideas in those two different spaces over 70 years – but they are both three dimensional worlds that people inhabit.

Coincidentally, shortly after I made the original edition, in November 2017, two other pieces of my video art, There is No Cure for Curiosity and Future City, were shown in a shipping container as part of the Mobile Utopia conference at Lancaster University.

There is more information about the video in a previous blog post of mine.