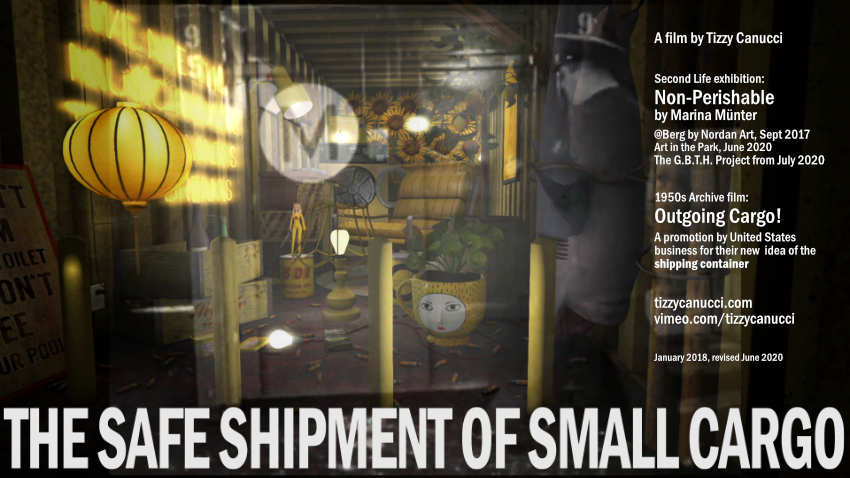 During summer 2020, Marina Münter’s exhibition Non-Perishable, of artwork in containers was shown again. It ws first at Art in the Park in June 2020, before being moved to Marina Münter’s own The G.B.T.H. Project, until 1st September 2020. The busy autumn I referred to in the original post in 2017 meant I was limited in the amount of material I had to work with. However, I was able to gather more material in 2020, and replace the video from the Mobile Utopia conference which I never felt worked that well.

The connections I wrote about in the original post still remain accurate and significant.

It was such a busy autumn during 2017, and so many things slipped by. I got to the opening of Non-Perishable, an exhibition of artworks in containers by Marina Münter at Berg at Nordan Art in Second Life, and made a mental note to go back to look inside all the containers. With fewer avatars, it should have been less laggy and I could get more video. But it didn’t happen. Two months later, and entirely by coincidence, two of my own machinima works were shown in a shipping container during the Mobile Utopia conference at Lancaster University in November 2017. In both art exhibitions, the contrast of container and content, the displacement of digital and actual, the juxtaposing of work and leisure, are central. These contrasts draw attention to unnoticed features – so doing the job of art to make one see the world differently.

But over Christmas 2017, I had time to go and look at what I had to work with. My latest machinima, The Safe Shipment of Small Cargo, combines video of both of these exhibitions cut together with some archive film.

The archive film is from Industry on Parade, a syndicated public affairs television program first aired during the 1950s in the United States. Many of the editions are now on the Internet Archive. Produced by the US National Association of Manufacturers, the programs were a mixture of news and propaganda, showing viewers progress stories of American capitalism. In Outgoing Cargo!, they introduced the viewer to a new innovation: ‘a steel container called a cargo van’ into which goods that ‘were more susceptible to pilferage or damage in handling’ could be packed for shipping. The title of the machinima is a line taken from this part of the narration. Well, the new term of cargo van didn’t catch on, while the more general term ‘container’ gained another more specific meaning.

Marina Münter’s exhibition, Non-Perishable, used shipping containers as sites for artworks, placed within an area of post industrial warehousing. The contents of the containers are an arrangements of items that are both in time and out of time. Many items in Second Life are modern replicas of the artefacts of the 20th century – radios, turntables, hand-crafted chairs – but remade with 21st technology. As Pickering and Keightley commented, nostalgia is not simply ‘a defeatist retreat from the present’, but a complex interplay of meanings and significances. The sentiments are often contrary, both melancholic and utopian at the same time, and knowingly reconstructive of the past. The purely visual nature of digital reproductions in virtual worlds dissociates them from the limitations of the technology of the past. It also avoids some of the fakeness of actual world retro, where the reproduction of appearances conceals a digital interior and modern performance qualities.

My exhibition for the Mobile Utopia conference, There is No Cure for Curiosity: Moving between worlds using machinima, also contrasted the digital new with the actual old. The two video works shown, There is no Cure for Curiosity and Future City, were about the future, as seen from the past or the present. The shipping container made a parallel shift in its repurposed use: digital artifacts were shown in a site used physically for actual objects that had value in a different economic sphere. The container bore the marks of its past industrial connection: dents in the walls, the floor was dirty and dusty, and a persistent and pervading smell of solvent.

Utopia is a common theme too, explicitly so in Mobile Utopia, but also as an ideological objective of Outgoing Cargo!. In common with other Industry on Parade programmes, it extols the virtue and progressiveness of US capitalism. As Samuel Dodd commented in an article in The Atlantic, the programmes were a humanising exercise as it showed the people behind the products and services of an industry. But it was also deeply ideological, reasserting what they though it should mean be to be American, in a USA that was defining herself as a new outward-looking global leader, in contrast to her pre-war isolationist positioning. Second Life itself, the site of Non-Perishable and the locations for my machinima, also carries an industrial ideology. It was born out of wave of late twentieth century technoliberalism in Silicon Valley that envisaged an online cyberutopia of equality, freedom, knowledge and truth*.

Within my machinima, The Safe Shipment of Small Cargo, I use the shipping container as the connecting link through these three locations and media, with different arrangements of reality, actuality and virtuality. Mundane and a hunk of steel, but a shipping container holds more than just the material objects inside of it.