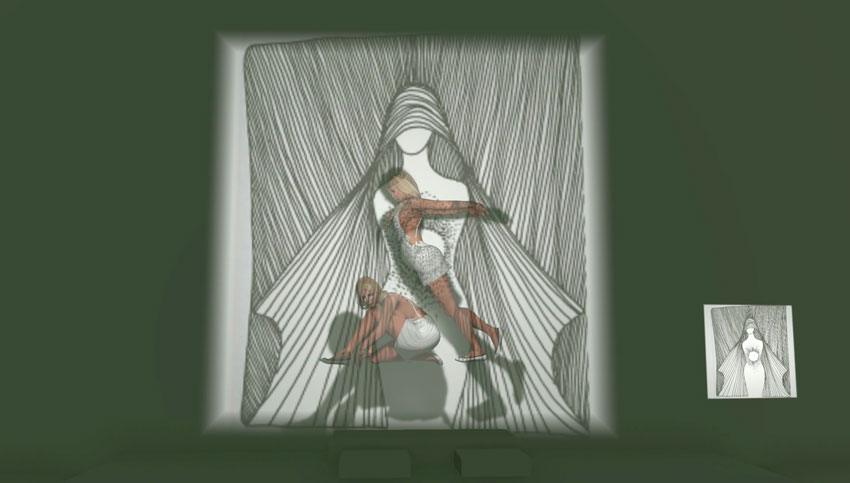 Artistic ideas always have inspiration from somewhere, but sometimes the inspiration is more simple and direct than others. In this case, it was a visit to an exhibition put together by a friend, Indigo Claire. I arrived thinking I was too late for the opening, but I’d misread and I was a day early. The upside was I had the place to myself to look around.

Some of the artwork had pose stands in front of them, allowing your avatar to run through the poses while the artwork ‘projected’ onto you and the back wall. One piece caught my eye, I think for the line and the limited colour palette (grey and white). I still had my windlight set for the previous place, which gave a greenish cast over the greys. I felt this worked better in the video, giving a greater sense of depth. As I discussed with a printmaker, Laura Boswell, a few days later in actual life, grey is not just grey and taking out black creates a different colour aesthetic.

As I ran through the poses, I noticed that some had sudden transitions and others were fluid. The patterns also reminded of a dress in white and grey in my inventory which had a similar kind of pattern to the artwork. And I thought of a piece of music I had ‘starred’ in Free Music Archive for use – Bach Gigue (BWV 995) performed by Musick’s Recreation and Cord-to-Krax.

I put on the dress and changed my shoes to white with black trim and soles. This is the only black in the composition and lends definition and ‘weight’ to the movement of my feet. I then ran through the poses while filming, moving forwards and backwards through the cycle.

The next day I started editing. I retained the smooth transitions and cut out all but one of the sudden ones, moving around the clips to see how they work with the music and against each other. It all started to come together when I slowed the clips in the first part down to 50%, which reflected how the tempo of the music changes. After further trial and error, varying clip order and speed and edit transitions, it was finished. A quick 24 hour piece primarily based on aesthetics.

The work combines some familiar aspects of Second Life – static poses, the effect of windlight settings, and the art exhibition. It was also a ‘found collaboration’ in that none of this was pre-arranged. The work was there to be photographed, interacted with, or reworked – a convention in Second Life that would be surprising if it was refused. I always credit the makers of material I work with as much as is practicable. But there is a but here – with a machinima I ought to have obtained the permission of the landowner for this work. I know the landowner well and I am sure it would not be a problem. But I will be talking about the unnecessary hurdles to machinima making in Second Life in my next blog post.