What does Age mean in Virtual Worlds? (Part 2) 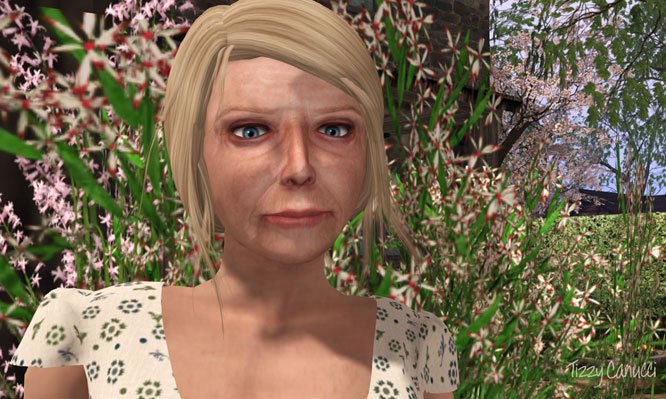 In cyberculture no one is middle-aged, which means that no one can be young either.

I’m returning to this quote1 from 1999 to discuss life, age, and ageing, to follow on from ageing and death in the previous post. On the surface, this statement appears to remain true in Second Life; there are few avatars around that portray older people. Those there are are mostly male, which reflects real life society’s attitude (at least in the west) to older men (distinguished or loveable rogue) and older women (invisible). But within Second Life this is a just portrayal, and is not necessarily related to any measure of age, be it in either biological or avataric age.

However, there is another level to this question, one that is related to the length of time virtual worlds have been in existence, and their consequent maturity and complexity. In cyberculture people are not ageless or uniform in age – but ageing is a different concept from biological age and is less about surface appearances.

Second Life was launched in 2003. Between 2004 and 2007, anthropologist Tom Boellstorff undertook a study which was written up into a book titled Coming of Age in Second Life2. In retrospect, and without any criticism implied or otherwise, that title may have been a little premature. In the flush of youth, the future is barely a consideration – teenagers tend to believe they are more mature than they really are, and even in their early twenties tend not to think about being old or of their mortality. Likewise, at the start of the digital revolution there was no sense that cyberculture itself would ever age or mature. Digital replicability meant that everything would be forever young.

However, cyberspace cannot suspend the experience of time for its participants; game time may be different from real time, but time still passes. We live in a continually moving present moment, the movement creating a changing perspective of the past and the future, based on an expanding memory and on unfulfilled desire.

As subjects, we all live in suspense, from day to day, from hour to hour; in other words, we are the hero of our own story. We cannot believe it is finished, that we are ‘finished,’ even though we may say so; we expect another chapter, another installment, tomorrow or next week… what has been lost in the [modern novel] is the power of the author to speak in his (sic) voice or through the undisguised voice of an alter ego, the hero, at once a known and an unknown.3

This surely is why we stay in Second Life – not seeking that which a more typical game offers, of achievement points, or levelling up and rewards and a path (even if routed through choices made by the player) through to a conclusion or an end point. We are not offered a storyline, which in a book would evitably reach a final full stop or in a film continue until the final credits roll. We build ourselves and our own story, and we have to find our own voice.

Out of the experience of being in Second Life, we create our own narratives – a rolling biography drawn from memory and experience – through which we describe who we are both to ourselves and others4. It is not universal or fixed; it is a retelling of the past in the context of the ever-changing present. These narratives ‘are told in being lived and lived in being told’5; we are agents in creating own lives, as the subject not an object. Second Life, in common with real life, is a world of action, not just a space6, where people do things, socially and creatively. Within a user-created environment, personal actions contribute to and interact with the development of cultural practices, each regenerating the other7.

I write about Second Life now in a way I could not have six years ago; I have accumulated experience, knowledge and material, just as the virtual world has developed. Where I choose to go, what I know, who I know (of), and how I write and photograph reveals my age in Second Life in a way that that the appearance of my avatar does not (the featured image for this post excepted). She has changed, but that reflects the changing milieu – mainly developments in technology and changing artistic trends such as the change from prim to mesh hair – rather than a process of ‘becoming older’. Unlike real-life, ‘becoming middle-aged’ in Second Life is not about appearances, but as in real life, it is related to of experience. Spending time in-world creates a temporal space where people establish digital social capital8 and for some, like myself, that social capital is too valuable to leave entirely invested in-world, and is reinvested in ‘real life’ activities, work and identity.

As for Second Life as it reaches 12 years of age, it’s successor has been announced: Project Sansar. One of Linden Lab‘s challenges will be transferring experience, social capital, and cultural practices across to Sansar, to seed the new world. It is more than, and different to, porting brand loyalty or technical expertise across to a new product – indeed, I’d suggest that this type of cultural and community movement has not been attempted before. Of course it would be possible to build it from scratch with a new user-base, but wouldn’t that be a wasted opportunity?

I thought of including this in the main part, but it didn’t really fit in. For the sake of argument, and rather arbitrarily, I will play with numbers – if there are four Second Life days in each solar one, I am the equivalent of 24 in Second Life, and the oldest resident is potentially 48. If you make it to 18 and ‘come of age’, you will have found something in Second Life which fascinates you enough to return time and time again. Just a thought.

Makers of older skins and shapes are scarce. The skin worn in the main image is *LBD* Older Lady – Mature Skin & Shape by The Little Black Dress, available in both their Second Life Marketplace store and their in-world store.