Ageing and Death in a Virtual World (Part 1) 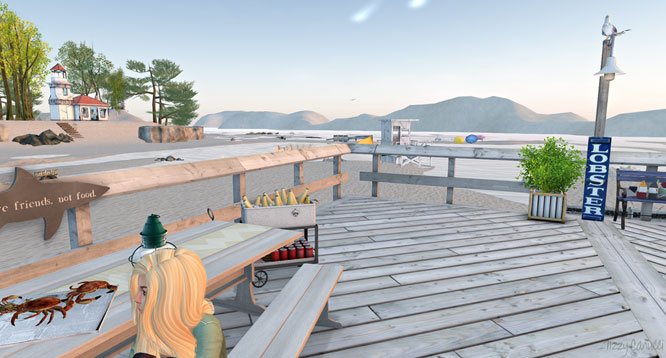 In cyberculture no one is middle-aged, which means that no one can be young either.

The above was written back in 19991 and I’ve been thinking about writing a post on it for some time. On the surface, this remains true in Second Life; there are few avatars with the features of older people. But there is another level to this question, one that is related to the length of time virtual worlds have been in existence, and their consequent maturity and complexity.

I would argue that people in cyberculture are not ageless or uniform in age. It’s more that they age differently from in real life, and it is much less about surface appearances. And ultimately people disappear – a form of, or linked to, death – but this is different too. It’s a big subject and this was going to end up being a very long post, so I’m going to divide it and return to living with ageing in the next post: What does Age mean in Virtual Worlds? In this post, I am going to talk more about that final stage of disappearance.

Some people try Second Life, wander in and wander out, barely noticed in the few days they are around. Others reside, becoming a part of a social world, and their going is certainly noticed by others. Sometimes that going is a sudden disappearance, without warning; I have known many. The person who always seemed to be logged in the contact list2 simply isn’t there, and the ever present contact list becomes a memorial by absence.

But there is both avataric death and there is corporeal death. The first may happen without the latter but the latter rarely happens without the former. Sometimes this produces a question over what happened; if you know someone was ill, is it just avataric death, or is it more? There again, some who are ill choose not to talk about it, or mention it only to a very few. If real life is haunted by biological mortality, a virtual life can be a haven.

In real life we often feel a sense of loss when certain public figures die. Often these are creative people – musicians, film stars and directors, and writers for example. So if we connect in real life through artistic works to people we have never met and never knew, is it surprising we do the same in Second Life? I’ve written before about how what we create, both avatars and other projects, reflects ourselves. The material difference between an avatar and any other object is closer in Second Life than real life, and both are equally constructed out of the imagination which all but eliminating the virtual difference. So if avatars and builds are more similar entities in virtual worlds than in real life, would one not expect that connection through places and creations to be greater?

I believe that we have come to a stage in virtual worlds where the virtual and the real more flexibly overlaps, integrates, interweaves – or remains, or is kept, apart by those who live in them. At the same time that residents maintain a separate identity in Second Life they raise funds for physical life causes. This is not contradictory: life is complex and balancing different aspects is a life-long achievement. But how this blending plays out within virtual worlds is a fascinating phenomenon that leads to both action and memorialisation – a reflection of virtual worlds as a persistent environment4.

In my response to ‘What Second Life means to me’, I captioned; ‘Second Life is human. Built by people, lived in by people’. I emphasised the human deliberately and avoided mentioning technology, not because technology isn’t a vital part, but because it is important to see beyond, or through, a technology or a particular program. Technologies mediate rather than determine; as a species we have co-evolve with the technologies we have created, from the very first tool, and they shape our society and how we live5.

Technology does not ‘do’ anything in itself – people do things through the decisions they make about how to use it, and just as importantly, how they draw meaning from the consequences. When technology becomes so commonplace that we are unaware of it, and decisions about its use become sub-conscious, it arguably does become a part of the human. However, I’m going to qualify that: living in any world also requires a sense of being-in-the-world. That means it can never be entirely sub-conscious; there has to be a consciousness to live in space and time (including the virtual).

It is often the creativity, the dynamic of being-in-the-world, that residents will be remembered for. It is more than recognition, more than a face or a name, an appearance or a label. It connects with their thoughts, their ideas, their way of being human.

Second Life locations: Garden of Grace, Skybeam Sandbox and The Trace Too, for as long as it continues.