A Tale of Two Openings 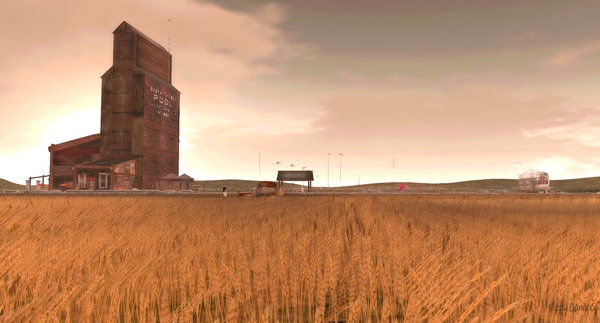 This post has an addendum responding to comments by Bryn Oh on her blog made during June. In response I staged an art intervention on Lobby Cam, which seemed appropriate in the circumstances.

Bryn Oh opened her new exhibition on Immersiva today, Lobby Cam. I remember her once talking about how Second Life art was different from openings in real life, as previews were usually a bunch of people with their backs to the artwork drinking wine. Surface appearances this evening looked rather like real life.

But as Bryn Oh is opening her artwork, SaveMeOh is opening hers on the back of Bryn’s – a dialogue in group chat which is challenging, contentious, argumentative and rude in turns. It is reproduced, in an edited form, on her blog: Fighting in the Lobby. When she says fighting, this is a couple of artists bartering words and others being drawn in. It’s not exactly knives and guns. But it’s interesting that just as Bryn selects how she presents her art, so does SaveMe, intervening in her own inimitable way. Art is a debate, not a statement, whatever the artist may want. But just as the person who is too noisy at the opening of an real life exhibition will be steered out of the door, SaveMe was ejected in the style of Second Life. As this is the crowning point in her performance, it is the one line in bold on her blog.*

Bryn’s latest work has a couple of repeated themes from her previous work. It deals with solitude and solitary individuals, and presents it in a narrative form. Unfortunately I found the narrative in group chat fed my curiosity more than the narrative on the sim. Is that wrong? Well, for me, how people interact is more interesting, as it happens in real time and with some unpredictability (I say some; the general view that SaveMe held was no surprise). The sim narrative, on the other hand, is based on doing some work based on what I was told to do.

The Lobby Cam narrative is developed by discovering pages – and unfortunately I got bored looking for them. The hud which fills itself in as you find the pages lies as incomplete as those books you used to compile with stickers that came free with bubble gum. I just don’t have the motivation to go hunting for these things – I know that hunts are really popular in Second Life, but it’s just not for me. I’m too free-form.

Bryn has made an interesting attempt to bring real life art, in the form of oil paintings, together with Second Life art, in the form of sim building. Technically, the real life art has been imported very well. But it’s white wall art in an environment that is natively open and exploratory – something that I have written about previously in blog posts: Art or Enchantment and Borderlands. Once out in the field, I just wanted to explore. The sim is all very nicely built and has a beautiful aesthetic. But maybe because Bryn has built it around her narrative, I couldn’t really find my own understanding, or create my own narrative or meaning from it. I will put it on my list go back and give it a second look, and should I find something else in it, I’ll do another write up.

* Update (8 June): Bryn Oh wrote a response on her blog, which to mind completely misrepresented my position, and for some reason she chose not to name me. The post above is about two different approaches in art, and the traditional artist has always had a fraxious relationship with the art interventionist who seeks to build a performance upon their work. It is something which they perceive as disruptive, and even vandalism (which arguably it may be). But once in the public, the creator no longer has control, and it is up for people to state their opinion. Art is a dialogue or it is nothing. But anyway, take a look at other posts in my blog. If you think the amount of references that I put at the bottom of my posts reflects ignorance, I’ll concede. 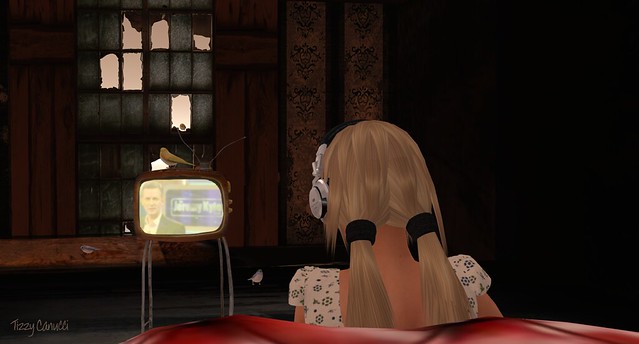 The Critic as Interventionist, Tizzy Canucci at Lobby Cam

My previous blogs on Bryn Oh’s work:
The Singularity of Kumiko
Imogen and the Pigeons