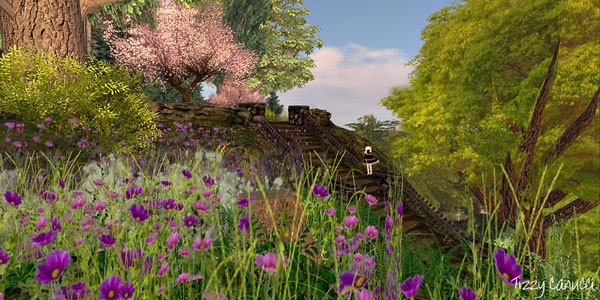 Earlier this month, the garden designer, Dan Pearson, was the guest on Desert Island Discs 1 on Radio 4. Early on he spoke about what he thought of gardens:

I think they are a place of escape, and a place of immersion. They are somewhere where you can be yourself, completely. I think they provide you with an enormous amount of freedom.

I’m always interested in how ideas translate between places, people and situations. His view of gardens is situated within a long cultural history of the garden as a place of peace, tranquillity, and isolation. Walls control who comes and goes and frame an intimate, tended inside from a wild, uncontrolled outside. For many in the twenty-first century, this ideal is difficult to achieve; high rise living, a garden given over to hardstanding for a car, ground that’s needed to grow food, and the disturbances of noisy neighbours, traffic and aircraft.

But gardens are not the only place that where people seek that kind of emotional feeling that comes from immersion. It was always the way of stories, originally oral and later also in books. The same could be said of the picture houses during the twentieth century, the period of the age of mechanical reproduction. In this digital age of infinite replicability, of virtual worlds, virtual reality and 3d reproduction, immersion is a given – it is not so much whether, as how much. I happen to like living in the twenty-first century, when I can enjoy them all. Immersion has always been an important part of how I experience life.

But social differences are revealed in different aspects of art forms; between great gardens and vegetable plots, between art film and blockbusters, between painting and photography, between video art and games. Between those produced in small numbers for discerning audiences who can display their knowledge and possess them, and those produced for a mass market with a seemingly functional repeatablity and replicability. The former saffron, the latter vanilla. Yet vanilla is the second most expensive spice after saffron; it is only the symbol of the ordinary because of its ubiquity and popularity, and despite the exquisite qualities of its flavour.

In the early twentieth century, Gertrude Jeykll revolutionised garden design through the use of colour. She was a talented artist and photographer, and designed gardens with an eye for how they would appear to the camera, preserving the textures in the black and white photography of the time. As an artist herself, she claimed that it was difficult for any artist to possess their own possessions, as the creator is only too aware of the imperfections. She also understood the ephemerality of gardens and did not want her own garden at Munstead to be preserved after she died. ‘A garden is a picture painted with flowers and foliage’, she said 2, and each year a garden the garden becomes a slightly different picture as the plants seed, die back and regrow. Without the active work of the gardening artist, the garden will cease to be their vision and become a degraded reproduction of their original ideas.

There is a quality in ephemerality that goes beyond value. It is an experience, not a possession. It must be treasured in the mind or the collective memory, not as an object.

And in the world of the digital, all has the potential to be preserved, yet at the same time it is so ephemeral. In Second Life, sims disappear overnight, the trace remaining unseen on the server until it is overwritten. After that, all that is left is memories and a few photographs.

1 Desert Island Discs is a long standing radio programme on BBC Radio 4 where an interviewer talks to someone about their life and influences, and they weave in eight tracks of music selected by the interviewee. The programme with Dan Pearson was broadcast on 8th February.