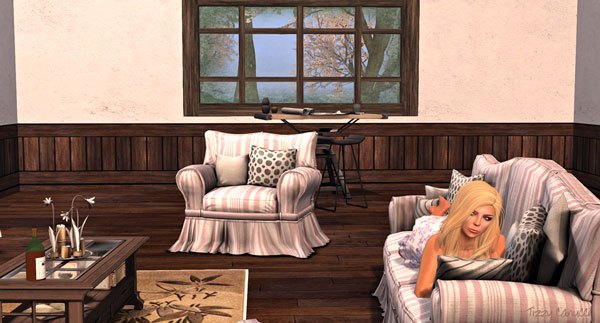 I’m sitting at home in Second Life, music playing, keeping an eye on the conversation box. Five years ago today, I first logged in.

Why? Well, I was in my final year of a degree, and I’d written an essay on authenticity (in the sense Heideggar used it) in terms of online spaces. In putting the essay together, I’d come across a book chapter, David Gauntlett‘s Web Studies: What’s New1, which talked about Second Life as a user generated environment. Having written about it (well, referred to it), I thought I should look at it.

So, I went in with the intention of deleting the program after the weekend – I know how I get hooked on games, and that was my strategy for controlling it.

Here was a fascinating world, where people create their own own things, their own societies. It is driven by creativity, it exists because of individual people’s creativity. (Linden Labs and your ToS changes, please note). So much of what people create is different from the real world; yet so much is clearly rooted there. At some point this coming year I will write something about the common themes – romanticism, nostalgia, decay,  sexual expression – but that’s not for now.

I have discovered so much about myself through Second Life, through my interactions with other people. I didn’t know it at the time, but I entered this world at a time when my life was about to turn upside down, and this other world provided a constancy that at times I clung on to. Escapism? Well, yes, to a point – but the social interaction helped.

There are have been times when I was on the verge of leaving. Despite trying to avoid ‘drama’, I found myself in the middle of it on one occasion. Second Life is not ‘just a game’ – elements of ‘games’ occur in most software, even when it is primarily work orientated, and social networking and games are closely tied2. Conflict hurts, so why stay? Partly because I still loved the place, but mostly because there have always been people I looked forward to talking to.

The photography side of my Second Life is something that has given it more depth over the past eighteen months. It’s an interesting challenge and an incentive to find the most beautifully creative places. I was a modelmaker in the early years of my working life, and that certainly plays a part in my respect for the work of others. But with that background, why have I not done more building? Good question. I don’t know – it’s a question I keep asking myself, but I really don’t have an answer.

I think this is enough – I’m not going to spend the rest of my rezz day writing a blog post. It’s time to cook something for my rl body to eat, then I’ll be back in sl, looking for something interesting to do this evening.