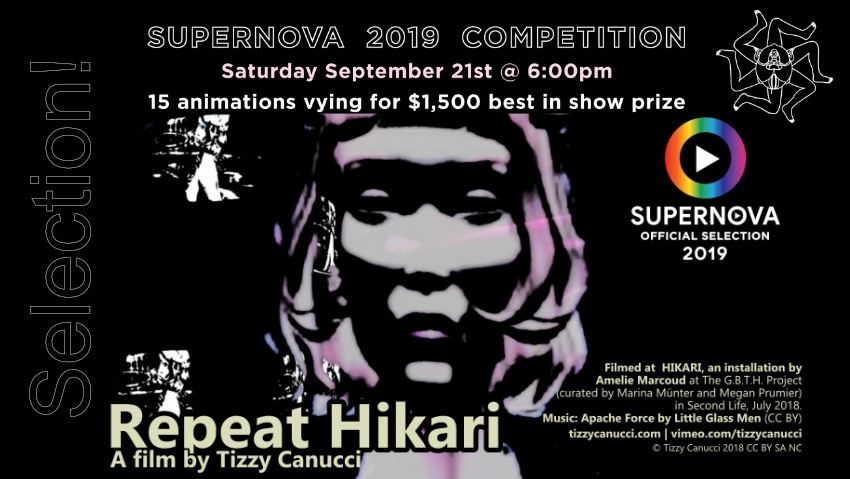 Having Repeat Hikari selected for Supernova Digital Animation Festival again thrilled me plenty. But I now know which category, and that is a real extra. I am one of the 15 Artists selected for the ‘prestigious’ 2019 Competition program, chosen from the many submissions collected through FilmFreeway.

The competition is the cornerstone of the annual festival, taking place starting at 6:00pm across all three feature LED screens, equipped with sound and located in the heart of Downtown Denver. Our temporary LED screen in the Denver Performing Arts Complex Galleria offers the most viewer friendly position, with seating, a cash bar and an information station. Come join us Saturday September 21st for this fun, free and exciting event featuring artworks from across the world.

I want to say first that this is a reflection of how and where I work, reinterpreting the creativity of others. In this case, particularly Amelie Marcoud’s art and the setting created by Marina Münter and Megan Prumier at The G.B.T.H. Project. But I usually include, to a greater or lesser degree, material from outside of Second Life. In this case, it is the music, and Apache Force by Little Glass Men, sourced from Free Music Archive under Creative Commons (BY).

It also shows that Second Life has the potential for art and creativity, and for video work. It goes beyond the word ‘machinima’, which I think has now become a debased term tied to commercial games promotion. Call my work video art, digital animation, or artists moving image… It is not just about recording ‘game’, but is about trying to say something more in an artistic and aesthetic sense. Everything in virtual worlds comes from the actual (‘real’) world and returns to it. That is an idea I increasingly recognise and work with. And what can be produced in Second Life can be comparable to video art originated in other places.

Finally, this has a real personal meaning for me. I’d made some interesting video works before The Constant Falling in January 2016. But that marked a change, and a different way of thinking about virtual space and how things were made collectively by others in Second Life. Our Music of the Spheres followed shortly after – my first selection for Supernova. Shortly after, I started my PhD at Lancaster University. The answer to the question ‘will it be practice-based’ was an instant ‘yes’, even though my academic background is primarily sociology. It’s been a heck of a ride.

So just to finish – here is the video that will be showing in Denver: