Ebony Glendevon, the curator at The Zeigler at Somerton has been trying to get an exhibition out of me for a while. But with being so busy in real life, including to getting to grips with the moving image, it’s taken some time.

Besides which, I have my doubts about inworld exhibitions. And I couldn’t think of an idea to build it round; things would have been easy with my back catalogue of images, but ideas are better.

One of the questions I have is about how to portray Second Life as a dynamic place. Through blogging I create a dynamic by using words to link images and discuss meaning. Although I have stand-alone images on Flickr, it is not the primary purpose of that site. It provides a resource for blogging, and a space for thinking and writing through the process of image making.

Just recently I’d combined two images because I liked them both. I really didn’t feel they had strength on their own – the figure at the centre is too small. However, in replicating them, the figure is given promience and a sense of movement through being the one element in each that is different. 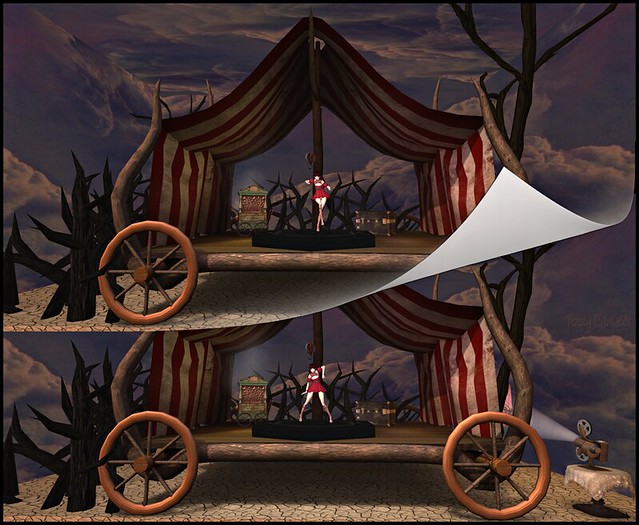 So this is where the idea of Repeat & Reflect came from. Some images I had already put up on Flickr and I knew contained repeated elements as simple compositional features. Other images I built up from more than one image, drawing on shots that I had on file but not previously used or posted. I’m now thinking that maybe I should have kept more of those images with minor differences that I have deleted in the past! But as a photographer of many years, I know that its easy to accumulate masses of material, and thinning is a good way of getting familiar with what remains and using it more effectively.

I have yet to ask how long the exhibition will be up, so I can’t tell you when it finishes! The new compositions will not be going up on Flickr until the Zeigler exhibition has been up for a reasonable amount of time. Here is the landmark: http://maps.secondlife.com/secondlife/Somerton%20Greenwich/170/51/31 – please let me know what you think. I do appreciate feedback.