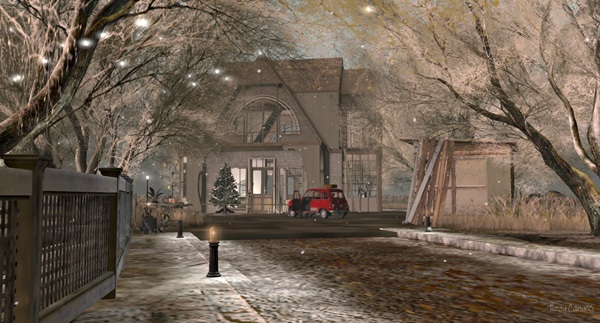 From heat through leaf fall to snow, Second Life mimics the temperate world. But unlike the real thing, you aren’t going to be stranded, freezing and sliding around in ice and snow. It has an idealised, regular and predictable pattern. And even if you think of snow as cold, white wet stuff you could cheerfully live without, the white stuff in Second Life is always dry, white and crisp, and cold only in a visual way.

As I look out of my real world window, I see fields and trees, and I know if it turns snowy I’ll be out there with a camera. Every day is different, but frost and snow is transformational. So it is with Second Life, and I’m tempted to go back to the places I visited earlier in the year to see what they look like now. But I know I won’t have the time to do them all and I will have to content myself with just a few.

Here’s one for a starter. L’Arc-en-Ciel is sub-titled: “The story of life is quicker then the blink of an eye, the story of love is hello, goodbye.” The winter shot is one part of the region that I looked at during the autumn, but I just couldn’t quite find the angle on it. Today was much easier – the Christmas tree is up, and people have just arrived. The car doors are left open, as they move their stuff into the house. There’s coffee brewing, and food getting unpacked. There’s a story that tells itself. 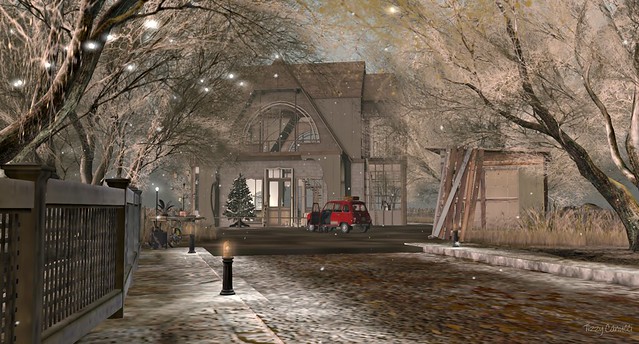 Back in the autumn, there were different stories – they are still there now, but they are not the ones I see. Photography is like that – it’s not about capturing all the stories at once. Each visit reveals a different story or a different angle, as the seasons, light, and one’s personal mood changes. Here is the first of two stories I saw on the previous visit – desertion. People have left, and the fallen leaves emphasise endings – the end of summer, the warm colours indicating twilight. At one time people filled the car, maybe went on holiday, to the movies, on shopping trips. Nature takes over, grass growing round the old pumps and deer wandering through. It may be a little poignant, but there is still some romanticisation.

The second story is of the bar and the chapel, facing each other across a rain sodden street, both as cheerless as the other. One proclaims salvation, the other sexual excitement, in a contest which is over-promising on both sides. Again, there is a sense of abandonment, reflecting our almost nihilistic attraction to the run down and shabby. 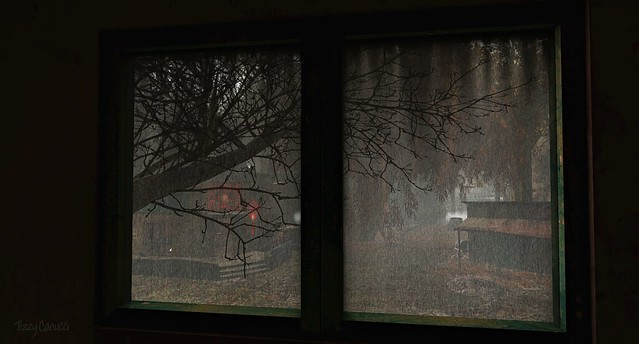 ‘Through Branches and Rain’, by Tizzy Canucci, on Flickr. 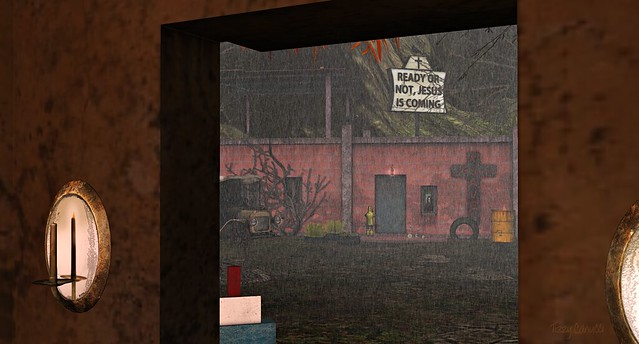 ‘From Bar to Salvation’, by Tizzy Canucci, on Flickr.

Across the seasons and these stories are two repeated ideas in Second Life – one of the romanticisation of an idyllic life, an escape from the awkward details of the real world, the other that reflects our ambiguous emotions towards dereliction and decay. Love and death. Eternal themes.

2 thoughts on “Autumn to Winter, Leaf fall to Snow”