This time I thought I’d give some of my thoughts on composition, based a shot I’ve put on Flickr: Dozing at Cheeky Tiramisu. 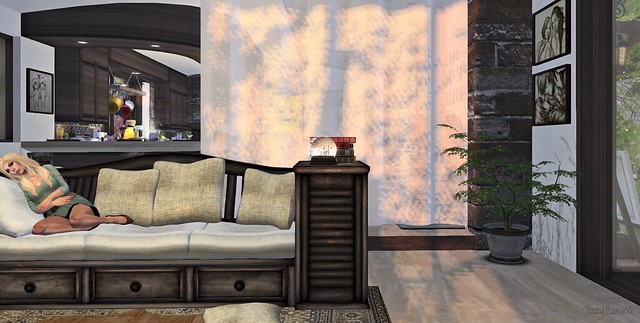 This is a shot I really like – definitely one of my recent favourites of my own photographs inworld – taken at Cheeky Tiramisu. The underlying reason is its strong abstract quality. The square of light in the centre divides the composition, while other rectangles break in… the bottom of the sofa, the cushions, the brick wall, and especially the end of the sofa, which also divides the composition. In contrast to the rectangles is a globe, dead centre of the composition. Glimpses of the outside are visible on either side, little more than hints of what is there, though the kitchen’s uniquely strong colours draw the eye through. The living world is another mirrored feature on each side. This includes human faces as people or as pictures, and the placing of the human figure and pot plant. To the right, the pot plant creeps in as an extension of the outside world, while to the left the human figure blends as quietly and as still into the scene as the plant. These two are the only soft elements in the room, as even the sofa cushions are rendered squarely geometric, but they break into the scene in different ways, the body softly draping and the plant displaying leafy layers. There is symmetry in the composition, but it is balanced through differences as well as by samenesses. This is not what I thought before I took the shot. I was working as I always do – instinctively in a visual, not a verbal, mode. But I’m pretty sure that these elements are what led me to think this was a composition that I should capture.