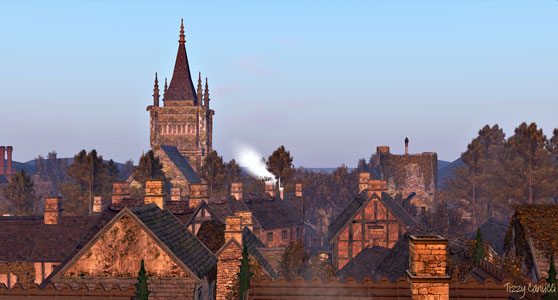 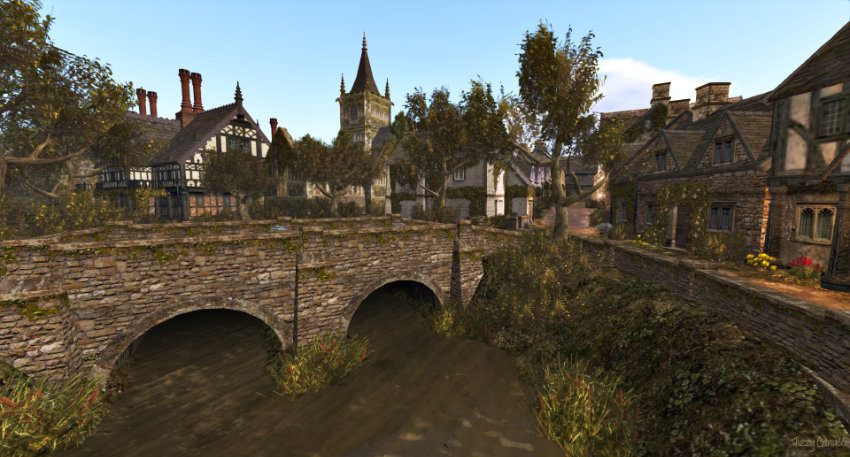 The River Wyvern, a photo by Tizzy Canucci.

Goatswood is a representation of a Victorian village in rural England, somewhere in the Midlands, loosely based in appearance on Castle Combe in Wiltshire. It is a role play sim, but visitors can obtain a three day pass at Mortchester ticket office.

The landing point is at Mortchester station, and there’s a sense even at that point that this sim is going to be something special. Many landing points are perfunctory, mere holding boxes before avs move onto the main stage, but this has the atmosphere of a station that goes somewhere.

A train of somewhat lost North Eastern Railway carriages is your transport to Goatswood station. The NER operated in the north of England, and never reached the midlands – but this is fine. The history of great British model railway layouts is based in ‘what if?’s – of imagination fused with historical accuracy.

The issue I raised in the title was about modelmaking and virtual worlds, and I believe they have a strong connection. Scenic modelling in the solid has flowered in model railways. In contrast, scenery has to be practical and functional in roleplay games and is generally stylised in architectural modelmaking. However, for some railway modellers the railway passes through and in the process provides the reason for the buildings and scenery. George Iliffe Stokes is the name from the past, Allan Downes from the more recent, for whom getting the feel and sense of place was the most important factor in modelmaking. Pendon Museum is the biggest and most impressive example of a layout which attempts to capture an era in model form, and is open to the public.

It is striking how Goatswood creates similar scenes, with the same challenges of compressed scale. But within this recreated environment people can move and live, which is something that modelmakers in the solid could only dream of.

Tizzy Canucci made models of buildings for a living for eight years in rl.

2 thoughts on “Modelmaking and virtual worlds”