CGI killing photography? No, not really. 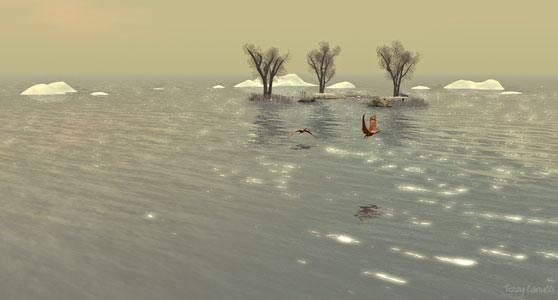 There was a story recently on Wired by Joseph Flaherty about CGI which I picked up on via Michael Zhang on Petalpixel, whose headline read “Extremely Realistic Computer Generated Imagery is Killing Photography Jobs“.

Maybe those of us who have had more to do with computers realised a long time ago that those smart boxes of software which you selected for the purchase of download-only software weren’t for real. And, what’s more, this might have had something to do with some of the software that those boxes represented but did not actually contain.

The death of photography has been predicted on the basis of technological advances for a long, long time. Alfred Stieglitz in 1897 regarded the new hand held cameras as only suitable ‘to jot down photographic notes’ on a journey. Likewise, the credibility and acceptance of colour in photography is relatively recent, despite viable colour process being over 100 years old. ‘Photoshopping’ is the modern fear. But for anyone preparing photographs for print or web publication now, a working knowledge of Photoshop is essential to give them the clarity and depth of colour that readers expect. Photographers used to manipulate film in darkrooms and printers proofed printing on press by adjusting the ink balance as the paper passed through. Today, it’s done in a computer for the same reasons, and as a bonus the amount of print waste is vastly reduced.

A photograph is an image. That’s what it is. Reality was present when it was taken, but that reality has gone into an unrevisitable past, and it was a partial, selective sample of what was present then in any case. It is the burden of  photography that, unlike painting, it is expected to show a reality truthfully, as things were. Except it doesn’t. It’s an image, and it means something different for everyone who looks at it, as they read meanings from it, and read meanings into it. We read meaning into the software box I mentioned earlier, which is clearer and makes more sense than writing out a sample passage of the software; Amazon’s ‘look inside’ feature doesn’t really work when there’s just a series of 1s and 0s.

A photograph is a drawing (graph) with light (photo), and both photography and CGI can equally lay claim to generating them. So where does this all fit into Second Life? I take photographs. I draw with light. I spend more time over them than the Second Life term, snapshot, would imply, though whether it shows in the results is a matter for the viewer. In them you can see an image, which represents what I saw in someone else’s representation of what they saw, and then recreated in Second Life. One of the things I like about Second Life is that there is little distinction between art and photography, which has bedevilled and damaged their relationship over the years. I think this may well be because there is no argument that a Second Life photograph shows reality, and consequently is relieved of its burden of truth and allowed to be what it really is. An image.