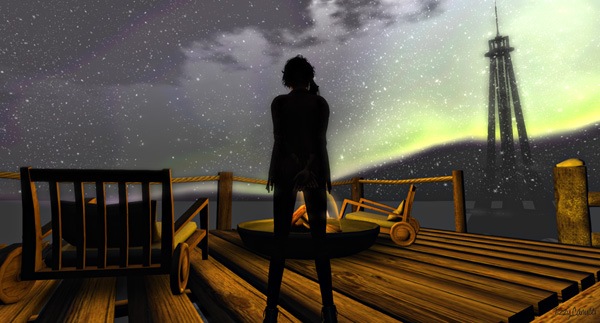 Today I’m going to take a couple of interesting regions of Second Life with strong visual impact, and I’m going to talk about the similarities in how they create an interpretation of the world. On the surface, they seem quite different. 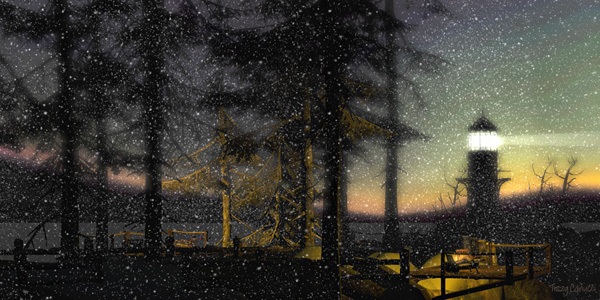 Aspen Fell is naturalistic, predominantly dark and the region is treated as a scenic whole. 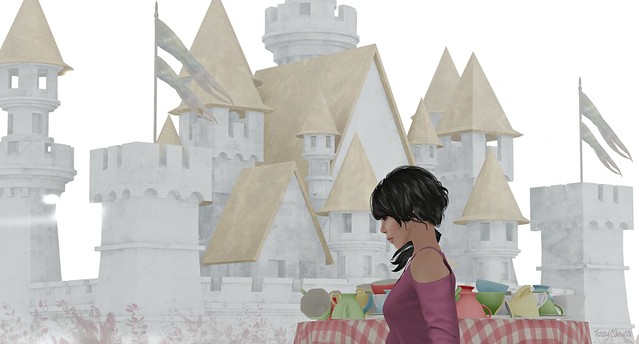 Intro is fantasy and bright white, with a series of small set pieces linked by a general theme across the region.

However, I think the principles behind the use of both colour and music are similar. In both regions colour is used in a controlled and sparse way, emphasising the monochromatic nature of the majority of the area. It should be remembered that this is on a screen, this is not just the monochromatic range of ink on paper, but is combined with the high dynamic range of lightness as well, from deep black to full bright white.

Aspen Fell uses vivid colour emerging out of deep black – it is night and the Northern Lights, or Aurora Borealis, shimmers across the sky in ever changing patterns. At Intro, pastel colours emerge gently out of the bright white surroundings in the various scenes. In both, colour is emergent, and emphasises through its limitation, not its excess. The approach is similar in principle in both, but in practice starts from opposite ends of the monochromatic range, so creating quite different moods. The light airiness of Intro is an ideal calm backdrop for the products that are being sold in the shops. 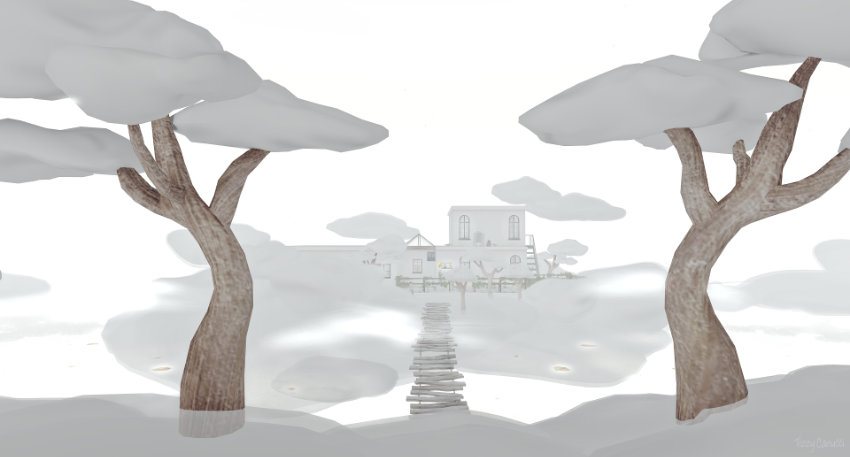 Aspen Fell is a showcase for building work, and generates spectacular high drama.

Music in both regions is also an important part of the build. I have to say I find it difficult to understand how people can use Second Life without any sound. This is a multi-media, multi-sensory world. Just as I like to use the windlight settings for regions, I like to listen to the music stream.

The decision process for builders and owners is different from visuals though. Setting up a windlight setting for a region is a clear decision to make a change; there will always be light, night and day, from the default settings. However, there is no default music stream; sound is always a choice, and arguably a more significant choice because of that. Yet often the choice is quite generic, one of a relatively limited number of favoured streams in Second Life.

However, in these two regions, there are music choices that work closely with the visual. The music stream at Intro is shared from another region, Chouchou, which is the home base of a collective of music makers in Second Life. The ethereal Japanese soundscape emphasises the smooth white and pastel lightness of the landscape. Aspen Fell, on other hand, streams their choice of western music, mostly North American torch songs. Again, the soundscape reinforces the landscape, the big dynamic range and intense vocals of the music mirroring the wide contrast between the darkness and the lights in the sky, which are saturated in colour and constantly shifting in hue. These are both amazing examples of the possibilities of Second Life. One thing’s for sure – they won’t be here for ever. So go look while you have the chance!