Change: the nature of Second Life

The last post featured  Annwn Willows, and Joanna Corith has just announced that it will be closing on the 26th June. So you have less than a week to go see it, and I’m going to take this as a good excuse to share another shot from when I was there last. 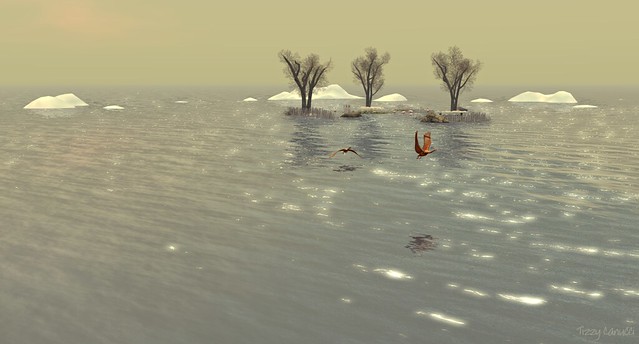 Such is Second Life – change is continuous, and time seems to move at a faster pace than in real life. And just as this one sim is about to disappear, Linden Labs have let it out that they are concentrating their resources on developing a successor virtual world to the current Second Life.

I sometimes wonder why I feel the need to put time and effort into capturing images of Second Life. I think it has much to do with its ephemeral nature. As Hart Crane said of Alfred Stieglitz, the early 20th century American photographer, in photographs a moment in time is ‘caught so precisely that the motion is continued from the picture indefinitely: the moment made eternal’ 1.

It also has to do with its illusory nature. Photography in the real world takes reality and turns it into a shadow 2. But photography has an inverse relationship to the subject in virtual worlds; it takes a shadow and solidifies it into a reality, a form which is storable and may be printed as an object.

And so images captured as photographs or snapshots give the ephemeral, illusory moments of Second Life an enduring life as ‘material realities in their own right, richly informative deposits left in the wake of whatever emitted them’ 3. In a week’s time, photographic images and memories will be what remains of Annwn Willows, and at some point in the future, the same will be true for all of Second Life.

Featured image – Roche. A later addition to the post, Roche closed in July 2015