You are Not Allowed to Fish 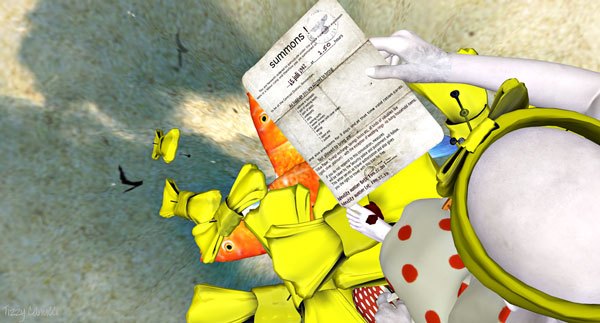 You are not allowed to fish #2, a photo by Tizzy Canucci, one of a set of three on Flickr.

This is Rose Borchovski’s installation now at torno Kohime Foundation – the opening night was last night (17th April), where the photograph was taken.

It’s the story of Beth and her grandchild Lot, who are forced to leave their home because of a war.

The war came to them in stages, starting with rulings about what they were not allowed to do.  During the war they are separated and Lot gets lost. Beth will never find her grandchild again. The symbol Rose used was the Saint Christophe, carrying the child on his shoulders across the river. Rose says in her notes; “For me it is the most sad and hard  installation I have made in sl, and contains many emotions, the not understanding, the fear, the loss and pain of an upcoming war and separation”.

You are not allowed to fish #1, photo by Tizzy Canucci on Flickr

I took the photo to the right at its original site as part of the larger installation, The Inevitability of Fate, which was my second upload to Flickr from Second Life.