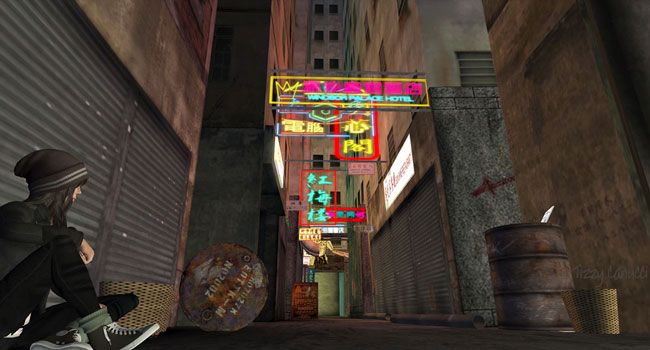 It’s a long time since I’ve been to Kowloon, and uncharacteristically for Second Life, it doesn’t seem to have to changed much. It’s based on a historic place, Kowloon Walled City in Hong Kong, which has now been demolished.

The landing point is just outside the main gate, which opens onto the brightest and widest area shown above. Tall buildings crowd together, and the rest of the sim is cut through with narrow alleys. It takes a long time to explore fully because it is so difficult to navigate, even with the map up, as the alleys turn and it’s impossible to see far ahead.

What is also difficult for me also, unusually, is that the language is not English. I assume it’s Japanese, the language of the creator. I do sometimes wonder what areas I miss because of language differences. However I did find the wonderful Lika Ruby store from here (more pics coming up; they have an interesting building outside the back of the store), so I’ll have to keep following the links!